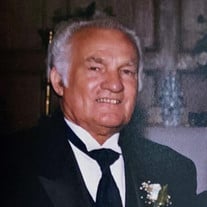 John Wesley Dillender, of Louisiana, MO, passed away on Saturday, October 16, 2021 in Jefferson City, MO. A Celebration of Life officiated by Rev. Beomseon Hong will be held at 1:00 P.M. on Saturday, November 6, 2021 at the Centenary United Methodist Church in Louisiana, MO. Graveside services with military honors will follow at the Fairview Cemetery near Louisiana, MO. Visitation will be held from 10:00 A.M. until time of service Saturday at the church. A dance will also be held Saturday evening at 6:00 P.M. at the Elks Lodge to honor John and Sharon’s love of dancing and music. John was born on May 2, 1931 in Louisiana, MO to Rufus Ray Dillender and Stella Pierce Dillender. He was married to Sharon Bandy on January 29, 1972 in Louisiana, MO. He is survived by his daughters, Stella Ann Maly (Otto) of Columbia, MO, Connie Dewey (Dennis) of Chambersburg, PA, Bonnie Dillender of Gypsum, CO, and Tracy Kingsley (Mike) of Linn, MO, a son, Stephen Dillender (Kim) of Rock Island, IL, and his grandchildren, Cody and Sydney Maly, Leanna Krogmann, Emily Hoger (Mark), Isabella Kingsley, Kirsten Lueders (Josh), Ali Dillender, Stevie Dillender. and John Wood of Leadville, CO, and great grandchild, Sophie Hoger. He was preceded in death by his wife, Sharon Dillender on July 18, 2021, his parents, Rufus and Stella Pierce Dillender, brother, James “Jr.” Dillender, a baby brother, George Dillender, and a son, John Wesley Dillender II on February 12, 1986. A lifelong resident of Louisiana, MO, he was a Graduate of Louisiana High School with the Class of 1950. He was also a lifelong member of the Centenary United Methodist Church. After high school, John joined the Navy and was stationed in San Diego, CA and then Pearl Harbor, HI. He served in the Korean Conflict aboard the USS Epperson and was a Gunner’s Mate. He was awarded the National Defense Service Medal, United Nations Service Medal, Korean Service Medal, and the China Service Medal. He was honorably discharged in 1954 and shortly thereafter began his employment at Missouri Edison in Louisiana, Mo as a lineman. He worked at Missouri Edison, later becoming Union Electric, until his retirement in 1993. John was a longtime member of the Elks Lodge 791, American Legion Post 370, and was a member of the Freemasons. In high school, John went to state in the short hurdles and loved playing football. He was part of the 1949 Louisiana Bulldogs football team recently inducted into the Louisiana High School Hall of Fame. John loved being on the river, hunting, fishing, boating, and enjoying friends. He spent many hours helping his children become good boaters, swimmers, and skiers. He called year after year to the local radio station and requested “Could I Have This Dance” by Ann Murray for the morning of he and Sharon’s anniversary so they could dance in the kitchen. John spent his years of retirement picking Sharon up for lunch daily, mowing grass, getting coffee at Hardees, and walking at the track or the elementary school. For Sharon’s birthday one year, he decided to give her “Monday gifts” and then carried this tradition on for many years. John loved to dance, swim, watch the St. Louis Cardinals and his grandchildren play ball. His love for his family was deep as he reminded his children in his last days that he prayed for them every day. He will be deeply missed by his family and remembered fondly by his friends. Memorials may be made to the Centenary United Methodist Church in Louisiana, MO. Online condolences may be made at collierfuneral.com

John Wesley Dillender, of Louisiana, MO, passed away on Saturday, October 16, 2021 in Jefferson City, MO. A Celebration of Life officiated by Rev. Beomseon Hong will be held at 1:00 P.M. on Saturday, November 6, 2021 at the Centenary United... View Obituary & Service Information

The family of John W. Dillender created this Life Tributes page to make it easy to share your memories.

John Wesley Dillender, of Louisiana, MO, passed away on Saturday,...

Send flowers to the Dillender family.