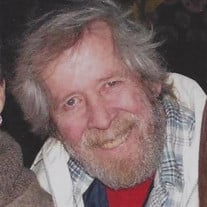 Mr. John Wayne Brown, 77, of Louisiana, Missouri passed away Wednesday, July 15, 2015 at the St. Joseph Health Care Center in St. Charles, Missouri. Funeral services will be held at 2:00 p.m. Saturday, July 18, 2015 at the Collier Funeral Home in Louisiana, Missouri. The Rev. Terry Cook will officiate. Visitation will be held from 11:00 a.m. until time of service at 2:00 p.m. Saturday at the funeral home. Members of Elks Lodge 791 will conduct Memorial Services at 1:30 p.m. prior to the funeral service. Burial will be in the Riverview Cemetery in Louisiana. He was born April 5, 1938 in Bowling Green, Missouri the son of Courtney Eugene Brown and Mary Louise Grady Brown. He married Shelia Doris Brown August 12,, 1966 in Louisiana, M0 and she preceded him in death June 6, 1979. He was also preceded in death by a son Michael Brown who died March 14, 2002. His parents, Courtney and Mary Grady Brown and a grandson, Brandon Hewitt who died in January of 2004. He is survived by three daughters; Debra Hewitt (Alan) of Collinsville, Illinois, Michele Highfill (John) of Pueblo, Colorado and Stephanie Hellums (Josh) of Bethalto, Illinois, his Loving Companion, Sharon Thomas and her family Cara and Daryle Wallace all of Louisiana, Missouri, 13 grandchildren, 4 great grandchildren, one brother, Dawson Brown (Martha) of Mexico, Missouri, one sister, Sandra Emert of Moberly, Missouri and nieces and nephews. John was a veteran serving with the United States Navy. He had been employed as the Press Foreman for the Louisiana Press Journal for 25 years. He was later employed at Chick’s Printing in Bowling Green, Missouri for 16 years retiring in 2003. He was a 45 year member of American Legion Post 370 in Louisiana and a 38 year member of the Louisiana Elks Lodge 791. He had also served as a Scout Leader for Boy Scout Troop 156 in Louisiana. Memorials may be given to the Donor’s Choice or to the James E. Cary Cancer Center, 5985 Hospital Dr. Hannibal, M0 63401.

The family of John W. Brown created this Life Tributes page to make it easy to share your memories.

Send flowers to the Brown family.