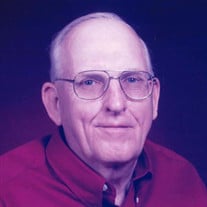 Mr. Jimmy “Jim” Franklin McCarty, 84, of Louisiana, MO, passed away on Sunday, January 3, 2021 at the St. Joseph Hospital West in Lake St. Louis, MO. Funeral services will be held at 1:00 P.M. on Friday, January 8, 2021 at the Collier Funeral Home in Louisiana, MO. The Rev. Bob Feeler will officiate. Burial will be at the Jordan-Buffalo Cemetery near Louisiana, MO. Visitation will be held from 11:00 A.M. until time of service Friday at the funeral home. Jim was born on May 15, 1936 in Hawk Point, MO to John William and Rebecca Doris Downing McCarty. He was joined in marriage on April 11, 1959 to Bonnie Louise Smith of Clarksville. She preceded him in death in 1999. He was married to Margaret May Hagen on January 29, 2003 and she preceded him in death on July 18, 2020. Jim went to work for the MO State Highway and Transportation Department and retired in 1991 with 32 years of service. He was in charge of running the motor grader and enjoyed his work. His other work included building the McCarty’s Mobile Home Park in 1969. He took great pride in maintaining the park and keeping it looking nice for the tenants who resided there. His greatest joy was his family. Especially the McCarty family reunions. His hobbies were riding his bike, gardening, listening to country music and going to country music shows, and most of all traveling in his fifth wheel in the winters to Corpus Christi and Mission Texas with Margaret. He was a member of the Second Baptist Church in Bowling Green, MO. He is survived by his 2 daughters, Rebecca Franklin and husband Bill of Silex, MO, and Marcia McCarty of Bowling Green, MO, step-sons, Shawn Hagen and wife Trana, and Donnie Hagen and wife Amy, 8 grandchildren, Cara (Adam) Voepel, Shelby (Christopher) Penn, Gregory (Sarah) Darnell II, Sarah Tobias, Samuel Franklin, Ira Franklin, Isaac Franklin, and Hattie Franklin, 9 great grandchildren, 3 sisters in-law, Dona McCarty,Sylvia McCarty, and Margaret McCarty, many nieces and nephews, and many step-grandchildren and step-great grandchildren. He was preceded in death by his 5 brothers, Bill McCarty, Dan McCarty, Robert McCarty, Harold McCarty, and John McCarty, and 4 sisters, Marguerite Wood, Mary Lou Moeller, Katheryn Busse, and Norma Jane McCarty, and 2 step-daughters, Cindy Church and Debbie Winchell. Honorary pallbearers will be Samuel Franklin, Ira Franklin, Dennis McCarty, Jim Wood, and Isaac Franklin. Active pallbearers will be John McCarty, Terry McCarty, Homer Busse, Harold Ralph McCarty Jr, David McCarty, and Adam Voepel. Memorials may be made to the MO Baptist Children’s Home in care of the funeral home.

The family of Jimmy "Jim" Franklin McCarty created this Life Tributes page to make it easy to share your memories.

Send flowers to the McCarty family.