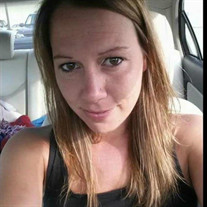 Services for Jessica Lynn (Rowell) Dolbeare, 38, of Louisiana, Missouri will be held at 1:00 p.m. on Thursday, September 14, 2017 at Collier Funeral Home in Louisiana. Reverend Don Amelung will be officiating. Visitation will be Thursday 10:00 a.m. until time of service. Burial will be in the Riverview Cemetery in Louisiana. Jessica was born April 2, 1979 in Hannibal, Missouri, the daughter of Joe and Charlotte (Houchins) Rowell. She married Jamie Prior in 1998 and two children were born to this union, Kileigh Ann Prior and Colin Thomas Prior. Jessica married Rodney M. Dolbeare on July 29, 2014 in Gulf Shores, Alabama. Survivors include her husband Rodney and her children Kileigh and Colin, step children Madison and Bailey of the home; her parents of rural Louisiana; two sisters Melanie (Tony) Myers of O’Fallon, MO and Ashley (Adam) McIntyre of St. Charles, MO and one brother Gary (Brandy) Frey of El Paso, TX; seven nieces and nephews: Logan, Noah and Zella Myers, Grace and Eston McIntyre, and Madelyn and Payton Frey. She was preceded in death by her maternal grandparents, Gene and Mae Houchins, Grandfather Eston Ashley Rowell, an uncle, Michael Rowell, Great Grandparents Homer and Edna Brown, Ray and Olive Houchins and beloved Father-in-law, Ray Dolbeare. Jessica graduated from Louisiana High School in 1997 and from Abbotts Academy of Cosmetology in Hannibal. She was employed many years in management at Hardees and later at AllParts in Louisiana. She was most recently employed at the Dental Office of Dr. Steven Chismarich. Jessica enjoyed watching her children play ball and attending Mizzou athletic events. She also enjoyed deer hunting, fishing and watching cooking shows on TV. She was a member of Frankford Presbyterian Church and regularly attended Dover Baptist Church. Pallbearers will be Adam McIntyre, Tony Myers, Sam Dolbeare, David Houchins, Chris Watkins, and Rob Wahlgren. Honorary pallbearer will be Logan Myers. Memorial contributions may be made to the Kileigh and Colin Prior Education Fund at Mercantile Bank in Louisiana.

Services for Jessica Lynn (Rowell) Dolbeare, 38, of Louisiana, Missouri will be held at 1:00 p.m. on Thursday, September 14, 2017 at Collier Funeral Home in Louisiana. Reverend Don Amelung will be officiating. Visitation will be Thursday 10:00... View Obituary & Service Information

The family of Jessica Lynn Dolbeare created this Life Tributes page to make it easy to share your memories.

Send flowers to the Dolbeare family.