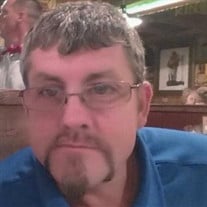 Mr. Jeffrey Alan Luck, 41, of Annapolis, Missouri formerly of Louisiana, Missouri passed away Thursday, May 19, 2016 at the Missouri Baptist Hospital in St. Louis, Missouri. Funeral services will be held at 2:00 p.m. Sunday, May 22, 2016 at the Collier Funeral Home in Louisiana. His daughter, Haylea Dawn Luck and Aunt, Janet Luck Miller will officiate. Visitation will be held from 4 to 8 p.m. Saturday, May 21st at the funeral home. Burial will be in Fairview Cemetery near Louisiana. He was born July 21, 1974 in Hannibal, Missouri the son of John A. Luck and Mary Kathyrn White Luck. He married Lyndi Lea Shade July 25, 1998 and she survives. Other survivors include his parents; Martin and Kathy White Luck Schambach of Louisiana, Missouri, one son; Jordan Allen Luck of Louisiana, Missouri, four daughters; Haylea Dawn Luck, of Louisiana, Missouri, Latisha Wells of Bowling Green, Missouri, Madison Sprinkles and Chloe Sprinkles both of Annapolis, Missouri, special nephew, Jase Andrew Luck of Louisiana, Missouri, a special grandson; Charles Frederick Jennings of Bowling Green, Missouri, one brother; Jason Andrew Luck of Louisiana, Missouri, aunts, uncles, cousins and his significant other; Kassien Sprinkles and family of Annapolis, Missouri. He was preceded in death by his father, John A. Luck in 1985, one son; Joshua Alan Luck who died in 1997, maternal grandparents; James “Doc” White in 1997, Virginia Corum White in 1988, paternal grandparents, Ed Luck in 1997, Maxine Luck in 1960, two step-grandmothers; Hazel Luck in 1985 and Martha Luck in 2010, and his step-grandfather; Luther Schambach in 2008. Jeff graduated from the Louisiana High School in 1992. He had been employed as Truck Driver for the Special Road District for a while. He was later employed as a Computer Operator for 5th Gear in Louisiana, Missouri. He was a member of the Annapolis Church of the Nazarene. Pallbearers were; Jason Luck, Brandon Brazier, Neal Miller, Mike Geery, Chip Elliott and Don Lamberson. Memorials may be given to the Educational Fund For Luck Children, % Mercantile Bank, P 0 Box 509, Louisiana, M0 63353

Mr. Jeffrey Alan Luck, 41, of Annapolis, Missouri formerly of Louisiana, Missouri passed away Thursday, May 19, 2016 at the Missouri Baptist Hospital in St. Louis, Missouri. Funeral services will be held at 2:00 p.m. Sunday, May 22, 2016 at... View Obituary & Service Information

The family of Jeffrey Alan Luck created this Life Tributes page to make it easy to share your memories.

Send flowers to the Luck family.