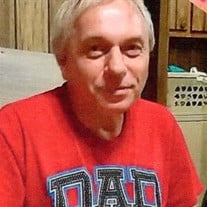 Mr. Jeffrey Baker, 56, of Louisiana, MO, formerly of Grove City, Ohio, passed away on Saturday, June 9, 2018 at his home in Louisiana, MO. Cremation rites will be provided by Collier Funeral Home in Louisiana, MO. A memorial service will be held at a later date. Jeff was born on June 25, 1961 in Columbus, Ohio to John and Mildred Baker. He was married to Thelma Louise Lewis in 1998 at Grove City, Ohio and she survives. He is also survived by his daughter, Brin Baker, a step-daughter, Catrina Turnbaugh, 2 brothers, Don Baker (Susie) and Ron Baker both of Ohio, a sister, Barb Baker of Ohio, and many nieces and nephews. He was preceded in death by his parents, and a sister, Gladys Baker. He had been employed at Maple Grove Lodge Nursing Home in Louisiana, MO for the last 11 years. He had worked at Massenelli’s Grocery in Grove City, Ohio for 14 years while living there. Jeff loved to play chess. He had a great sense of humor and loved to make people laugh. He loved his daughter Brin and step-daughter Catrina and considered them his world. He was adored by many and will be greatly missed.

The family of Jeff Baker created this Life Tributes page to make it easy to share your memories.

Send flowers to the Baker family.