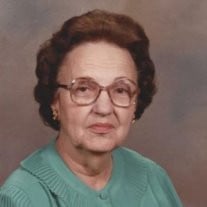 Jane Ann Jackson, 91, formerly of Louisiana, Missouri and New London, Missouri, passed away January 7, 2014 at Parkway Manor in Marion, Illinois. Funeral services will be held at 11:00 a.m. Monday, January 13, 2014 at the First Christian Church, 517 South Carolina Street, Louisiana, Missouri. The Rev. Jane Kelley will officiate. Visitation will be held from 10:00 a.m. until time of services at 11:00 a.m. Monday, January 13, 2014 at the church. Burial will be in the Barkley Cemetery in New London, Missouri. She was born January 15, 1922 in New London, Missouri, the daughter of Lloyd and Gladys Hulse Weaver. Mrs. Jackson grew up in New London and graduated from New London High School. She also attended Hannibal LaGrange College in Hannibal, Missouri. On December 31, 1939, she was united in marriage to John B. (J.B.) Jackson, and he preceded her in death on October 9, 2008. She is survived by three daughters: Rita Jane Jackson of Herrin, Illinois, Lou Ann Lawrence (John) of Moscow Mills, Missouri and Mary Jo Fosse (Lewis) of Marion, Illinois. 4 grandchildren; Julie Long (Rob) of Sedalia, Missouri, Amy Robinson of Carbondale, Illinois, Sarah Lawrence-Lohse (Adam) of O’Fallon, Missouri and Wes Walker (Kelley) of Marion, Illinois and numerous great-grandchildren. Also surviving are two cousins, Barbara Haupt (Bill) of Albany, Georgia and Hunter Nelson of St. Louis, Missouri. A homemaker her entire life, Mrs. Jackson enjoyed cooking. Summers were filled with canning and preserving the produce from the garden. Sewing, embroidery needle crafts and crocheting were her hobbies. In later years, she and her husband, JB, were often seen on their front porch swing greeting any passers-by, as well as visiting friends and neighbors at the Louisiana riverfront while admiring the grand Mississippi. Mrs. Jackson was a member of the First Christian Church in Louisiana, Missouri and previously at The First Christian Church, New London, Missouri. She was active in the Christian Women’s Fellowship and the Church Choir. In 2011 she was honored with the Deacon Emeritus designation at Louisiana. She was also a past member of the Daughters of the American Revolution (DAR-New London, M0). Pallbearers are; Sarah Lawrence-Lohse, Adam Lohse, Wes Walker and Lewis Fosse. Memorials may be given to the First Christian Church in Louisiana, Missouri in care of Collier Funeral Homes, Inc., 117 Barnard Dr., Louisiana, M0 63353

The family of Jane Ann Jackson created this Life Tributes page to make it easy to share your memories.

Send flowers to the Jackson family.