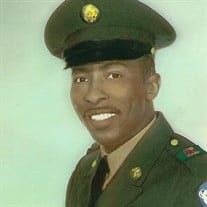 James Harry Watson, 84, of Hannibal, MO transitioned to eternal reward at 3:35 a.m., Wednesday, January 24, 2018, at Hannibal Regional Hospital in Hannibal. Funeral services will be at 12:00 p.m., Saturday, February 3 at the Collier Funeral Homes, 117 Barnard Drive., Louisiana, MO. The Reverend Minnie Smith will officiate. Burial will be at Eolia Community Cemetery. Visitation will be from 10:00 a.m. to 12:00 p.m. Saturday, February 3 at Collier Funeral Homes. James was a veteran of the United States Army serving his country with the greatest of honor and distinction. He served both in the Korean and Vietnam War. After 30 years of honorable service he retired on March 1, 1982. He received numerous performance awards, Army Commendations and Service Medals during his active and overseas assignments. After his retirement, he did not stop working. He enlisted with the Department of Defense (DOD) as a civilian licensed Fire Protection Systems Mechanic. He retired from DOD on July 31, 1996. James and Alice moved from Fayetteville, NC to Hannibal, MO in September 1996 to enjoy retirement with family and friends. James enjoyed and loved ham/radio communications. His call sign was "AB0Y". He was a life-time licensed member with the Federal Communications Amateur Radio for over 50 years. He always read books to educate himself. He taught himself to write and read music notes, repair TVs and radios. He loved tinkering with electronic gadgets. He built a computer from scratch before computers were popular. He was recognized and served 30 years of service in support of the United States Army Military Affiliate Radio System (MARS). He did not miss a beat communicating mars codes around the world. James not only loved ham/radio communications, he also loved church, fishing, playing his harmonicas, guitars, banjos and singing gospel songs. He self-taught himself to play all of those musical instruments. James was a very dedicated and faithful member at Willow Street Christian Church until he was not able to attend services. He was preceded in death by his parents, John Adam Watson, Sr. and Pauline Ella Watson; two sisters Daisy Jane and Marguerite Watson. He was married to Alice L. Dixon-Watson on September 14, 1966. She preceded him in death. Survivors include two daughters, Paula Abbey (Martie), Bolingbrook, IL; Martha Taylor Zion, IL; one son, Floyd Jackson (Jo Ann), Park City, IL; two brothers, John Adams, Jr., Donald (Kathleen) all of Eolia, MO; four sister, Frances Estella Hawthorne (Peter), Des Moines, IA; Ora Bell Conway, Clarksville, MO; Mary Lucille Warren of Eolia, MO; and Donna Thorpe of Minneapolis, MN; 9 grandchildren; 23 great-grandchildren; 7 great- great grandchildren; and a host of nieces, nephews, cousins and friends. He was preceded in death by one daughter, Margaret Ann Ayers; and two grandchildren Alice Marie and Anjenette Ayers.

The family of James Harry Watson created this Life Tributes page to make it easy to share your memories.

Send flowers to the Watson family.