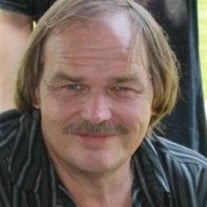 James “Jim” Hibbs was born in Peoria, Illinois on July 25, 1961 and went to be with his Lord and Savior Jesus Christ on January 2, 2020. Funeral services will be held at 1:00 P.M. on Monday, January 6, 2020 at the Collier Funeral Home in Louisiana, MO. The Rev. Richard Biggs officiating. Visitation will be from 4:00 P.M. until 8:00 P.M. on Sunday, January 5, 2020 at the funeral home. He leaves behind his wife Sheila, 3 children: Jessie (Ryan), Jenny (Sonny), and John, 5 grandchildren: Sophie, Brooklynn, Austin, Sawyer and Stella, a sister Rosie and 2 brothers Bob and Tim. He was preceded in death by his parents, Lester and Edna Hibbs, sister Shirley, and brothers Lester Jr, David, Willard, Lawrence, and John. He grew up in Camden, IL and graduated from Rushville High School. He later attended Western Illinois University. He began working at the Louisiana Walmart in 1984 at the age of 24 and worked there until 2005. He then began working at All-Parts in Louisiana where he was still employed. Him and his wife Sheila met in 1993 and were together for 26 years (they were married in 2015). Jim was very tech-savvy, enjoyed spending time with family (especially playing with his grandkids), reading books, talking politics, mushroom hunting, listening to music (mostly classic rock), watching Family Feud and helping Sheila with the daycare kids (which was great because they all called him Papa too). He was also a very active member at Elmwood Community Church and loved giving back to his church. On-line condolences may be sent at www.collierfuneral.com.

The family of James "Jim" Hibbs created this Life Tributes page to make it easy to share your memories.

Send flowers to the Hibbs family.