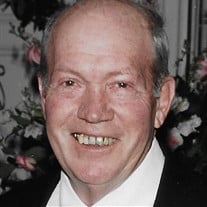 James “Jim” Grimm, a longtime resident of Clarksville, MO, passed away at his home on October 26, 2019 at the age of 86. Jim was born November 17, 1932 in Pacific, MO, a son of Frederick and Cora (Tannehill) Grimm. He graduated from Pacific High School in 1951. Jim married Pauline Muff on October 31, 1970, and she preceded him in death in 2013. Jim was an Army veteran. He served from 1953 until 1954 as an M.P. in Korea. Jim worked in banking and farming his entire life. He spent most of his professional life at The Mercantile Bank of Louisiana, MO, eventually serving as president from 1997 until his retirement in 2009. Jim served as a member of the board of directors for Meramec Valley Bank in Ellisville, MO for many years, and he was also a member of the board of directors for The Mercantile Bank of Louisiana, MO until the time of his death. Jim also enjoyed his farm life. He grew up working on his parents’ dairy farm in Pacific, and later continued farming in Clarksville. In addition to his parents and wife, Jim was preceded in death by half-brother Clarence E. Welmering, brother Frederick John (Jack) Grimm, and sisters Rosemary Jones and Virginia Smith. Jim is survived by one brother, Gerald (Pete) Grimm (Betty), one brother-in-law, William (Bill) Jones Sr., one stepson, Michael L. Anderson (Elaine), two grandsons, Michael Anderson (Lori) and Judson Anderson (Danielle), four great-grandchildren and many beloved nieces, nephews, and grand-nieces and nephews. A celebration of Jim’s life will take place at the American Legion in Clarksville on Saturday, November 16 from 11 a.m. until 3 p.m. If desired, memorials may be given to the Noix Creek Cemetery Association in care of Bess Gamm, 15586 Pike 280, Bowling Green, MO 63334.

The family of James R. Grimm created this Life Tributes page to make it easy to share your memories.

Send flowers to the Grimm family.