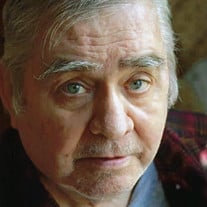 Mr. James "Bob" Henderson, 79, of Pleasant Hill. IL, passed away on Thursday, October 1, 2020 at the Hannibal Regional Hospital. Funeral services will be held at 11:00 A.M. on Tuesday, October 13, 2020 at the Collier Funeral Home in Louisiana, MO. The Rev. Don Hannel will officiate. Burial will be at the Greenwood Cemetery near Clarksville, MO. Visitation will be held from 4:00 P.M. until 8:00 P.M. on Monday, October 12th at the funeral home. Bob was born on July 30, 1941 in Clarksville, MO to James M. Henderson and Opal Marie Conner Henderson. He was married to Karen Tarrants on July 28, 1962 at the First Christian Church in Louisiana, MO. He is survived by his wife, Karen Henderson, 2 sons, David Henderson (Cathy), and Robert “Shane” Henderson (Taylor McCrory), a daughter, Rita Hollocher (Kenny), his grandchildren, Jamie Henderson (Charlotte), Derrick Henderson (Sara Eimer), Ashley Hollocher (Nate Cecil), Vince Hollocher, Aaron Hollocher, Dylan Henderson (Jasmine McCullough), and Maddy Henderson (Mac Baladenski), great grandchildren, Jasen Henderson, Janessa Henderson, and Abraham Cecil, 3 brothers, Curtis Henderson, Dickie Henderson (Mickie), and Claudie Henderson (Marie), and 4 sisters, Rose Mary Chamberlain (Gary), Dorothy Montang (Tom), Barb Hawkins (Rich), and Nancy Colbert, as well as nieces, nephews, other extended family, and friends. He was preceded in death by his parents, a brother, John Richard Henderson, and 2 granddaughters, Chasity Henderson, and Melissa Henderson. Raised on a farm near Clarksville, and after graduating from Clopton High School, Bob moved to Pleasant Hill, IL to work for the Panhandle Eastern Pipeline Company until his retirement in 1997. He remained in Pleasant Hill until November 2019 when he resided at the Maple Grove Lodge in Louisiana, MO. He was a member of the First Christian Church in Louisiana, MO. He enjoyed deer hunting, fishing, rabbit hunting, and had taken a couple of Elk hunting trips over the years. After retirement, he enjoyed camping. A trip he spoke of often was driving to and camping in Canada and Alaska making it all the way to the Arctic Circle. And Grandpa was always known for his hayrides and weenie roasts. Memorials may be made to the Clopton Alumni Association.

Mr. James "Bob" Henderson, 79, of Pleasant Hill. IL, passed away on Thursday, October 1, 2020 at the Hannibal Regional Hospital. Funeral services will be held at 11:00 A.M. on Tuesday, October 13, 2020 at the Collier Funeral Home in Louisiana,... View Obituary & Service Information

The family of James "Bob" Henderson created this Life Tributes page to make it easy to share your memories.

Send flowers to the Henderson family.