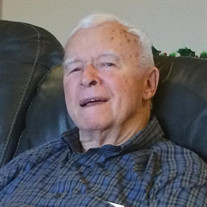 Mr. Herbert Bertrum Griffith, 91, of St. Charles, Missouri, formerly of Louisiana, Missouri, passed away on April 24, 2017 in Cincinnati, Ohio. Funeral services will be held at 3:00 P.M. on Saturday, April 29, 2017 at the Collier Funeral Home in Louisiana, Missouri. The Rev. Bill Maupin will officiate. Burial will be at the Greenwood Cemetery in Clarksville, Missouri. Visitation will be held from 1:00 P.M. until time of service at 3:00 P.M. Saturday at the funeral home. He was born on July 30, 1925 in Clarksville, Missouri, the 9th of 10 children, to Russell Ray Griffith and Bertha Bell Blackwell Griffith. He married Sue E. Gibson on March 26, 1948 in Jonesboro, Arkansas and she preceded him in death on March 12, 2016. They had been married 68 years. He is survived by a daughter, Bonnie Griffith Williams (Paul) of Cincinnati, Ohio, a son, Christopher D. Griffith (Nancy) of Mexico, Missouri, 4 grandchildren, Michael Williams (Mollie), Laura Williams Sunderland (Eric), Benjamin Griffith (Jessica), and Heather Griffith Laramie, 7 great grandchildren, Brodie and Oliver Williams, Samantha Sunderland, Evelyn and Alice Griffith, and Brayden and Maelie Laramie, a sister in-law, Bobette Griffith, and numerous loving nieces and nephews. He was preceded in death by his parents, 5 brothers and 4 sisters. He had graduated from Clarksville High School with the Class of 1944. He was a veteran of WWII serving in occupied Japan with the US Army. He attended the Presbyterian Church in Louisiana and St. Charles, Missouri where he had sang in the choir for 54 years. He had also sang in the Syracuse Men’s Choir. From the time of early childhood, he had a beautiful singing voice. He had been employed by Wagner Electric Company. His quote to live by was, “Live by patience, temperance, tolerance, and all things in moderation, and follow the golden rule.” He was a wonderful loving and caring husband, father, grandfather, and great grandfather and he loved his family. Pallbearers are; Paul Williams, Michael Williams, Benjamin Griffith, Eric Sunderland, Robert Griffith and Stephen Griffith. Memorials may be made to Greenwood Cemetery in Care of Collier Funeral Homes, Inc., 117 Barnard Drive, Louisiana, Missouri 63353.

The family of Herbert Bertrum Griffith created this Life Tributes page to make it easy to share your memories.