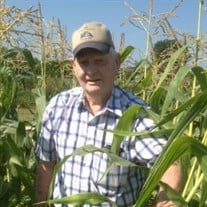 Funeral services for Mr. Harry William Law, 93, of Willow Springs, MO, formerly of Pike Station, IL, will be held at 11:00 A.M. on Thursday, September 13, 2018 at the Collier Funeral Home in Louisiana, MO. Timothy Law will officiate. Burial will be at the Riverview Cemetery in Louisiana, MO. Visitation will be held from 10:00 A.M. until time of service Thursday at the funeral home. Mr. Law passed away on September 10, 2018 at the West Vue Nursing Center in West Plains, MO. He was born on May 13, 1925 on a farm near Iberia, MO to Clarence Ledbetter Law and Alice May Hightree Law. He was married to Cora Gladys Wagner on May 12, 1946 in Bowling Green, MO and she preceded him in death. He was married to Phoebe Ruth Woodson Ferguson on October 7, 1989 in Vandalia, MO and she survives. He is survived by his wife, Phoebe of Vandalia, MO, his children, Dale Law (Terri) of Willow Springs, MO, Kenneth Law (Candy) of Louisiana, MO, and Gregory Law (Cindy) of Bay Minette, AL, his step-children, Earl Ferguson (Pat) of Plainfield, IL, Elayne Gore (Paul) of Vandalia, MO, Larry Ferguson (Carolyn) of Columbus, MS, Janet Brassfield (Bill) of West Plains, MO, Roger Ferguson (Mary) of Grand Junction, CO, and Anita Gordon (Darren) of Winfield, MO, his grandchildren, Daemon Law, Timothy Law of Alexandria, KY, Rebekah Hempen of St. Charles, MO, Nathan Law of Ozark, MO, Jesse Naessens of Bay Minette, AL, and Kane Law and Kara Law both of Louisiana MO, and his great grandchildren, Allison Holt of Springfield, MO, Austin Naessens and Logan Naessens of Bay Minette, AL, Arianna Law and Haley Law of Alexandria, KY, McKenzie Hempen and Peyton Hempen of St. Charles, MO, and Avery McKinnon of Louisiana, MO. He was preceded in death by his parents, spouse Gladys, son William, grandson Jarrod, sister Marjorie June Martin, brother Leonard Whitney Law, and twin brother Howard Author Law. In 1939, Harry moved with his parents and twin brother from a farm near Iberia, Missouri to a farm in the Mississippi River bottoms at Pike Station, Illinois where he then farmed from the age of 14 until his retirement from farming at 80. In addition to farming, in his younger years he worked summers in Kansas following the wheat harvest from one farm to another. In the fall he and his brother-in-law Louis Martin hauled dozens of truck-loads of apples from Pike and Calhoun Counties Illinois and peaches from southern Illinois to be sold by the bushel in many communities in the Ozarks. Later he drove a propane delivery truck for Uregas Propane here in Louisiana for several seasons; worked at Hercules Chemical Company in Louisiana, MO and for over 20 years at Dundee Cement Company in Clarksville where he was a crusher operator. He gave a lifetime of public service having been elected to several terms on the Pleasant Hill Community Unit District 3 school board; multiple terms to each of three Ross Township offices of Road Commissioner, Town Clerk and Assessor; and to several terms on the local MFA Oil Board at Louisiana, MO. Harry was a faithful Christian all his life and was instrumental in helping start the Church of Christ in Louisiana, Missouri where he was a member from 1954 until his death. He was a man of unquestionable integrity and was known for his kindness to everyone. Pallbearers will be Rebekah Hempen, Tyler Hempen, Kane Law, Whitney Law, Jesse Naessens, and Rusty Wunderlich.

The family of Harry William Law created this Life Tributes page to make it easy to share your memories.

Send flowers to the Law family.