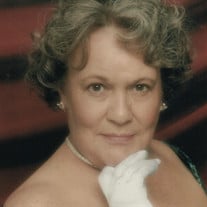 Harriett “Miss Harriett” Dolores Potter Davis, age 82 of Louisiana, passed away Wednesday, August 7, 2019 at her residence. Cremation rites were conducted according to her wishes by Collier Funeral Homes, Inc. in Louisiana. Services will be held at a later date. Harriett was born December 31, 1936 in St. Louis, the daughter of Claude and Jocie Walker Potter. She married Lawrence “Clay” Clayton Davis Sr. on October 6, 1953 in St. Louis, MO. Living in St. Louis and St. Louis county for 30+ years, she moved to Louisiana, MO to retire with her husband. She is survived by a son Lawrence “Larry” Davis, Jr., 2 daughters, Jacqueline “Jacque” Delores Davis Burns and Victoria “Vicki” Lynn Davis, 10 Grandchildren, and 14 Great Grandchildren. She was preceded in death by her parents, her husband Lawrence “Clay” Davis, Sr. in 2006, a son, Edward “Ed” Michael Davis in 2011, a daughter, Linda Diane Davis in 2012, a brother, Dee Potter, and a sister, Patsy Potter Bower. She was affiliated with many denominations over her life, but was always spiritual and definitely believed in God in Heaven. While her husband, a Korean War veteran, was in the US Army, she went with him to wherever he was stationed. She was a successful home maker raising her five children. She loved to crochet, play scratchers, and go to yard sales. She will be remembered as a beloved wife and mother. Memorials may be made to donor’s choice. On-line condolences may be sent at www.collierfuneral.com.

The family of Harriett "Miss Harriett" Dolores Potter Davis created this Life Tributes page to make it easy to share your memories.