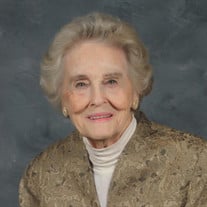 Grace Jane Cunningham Catlett, of Louisiana, passed away from natural causes on March 31, 2020 at the age of 95. She was preceded in death by her father and mother, Fred and Leonora Berry, her brother Fred Berry, Jr., her husbands, William R. Cunningham and Robert Catlett, and her daughters Sheila Benton and Cynthia Coil. Grace Jane is survived by her sister, Phyllis Payne, her sons, William Cunningham, Jr. (Mary), Jon Cunningham (Sally), David Cunningham (Kimberly), and Steven Cunningham (Cindy), ten grandchildren, and many great-grandchildren. Grace Jane graduated from Louisiana High School where she was an excellent student, drummer in the school band, and an acclaimed vocal soloist. After high school, she served her country as a civilian during World War II, joining the “Government Girls” program, working in the Pentagon in Washington, D.C. During this time, she performed work related to the “Manhattan Project”. After the war, Grace Jane attended the University of Missouri-Columbia. She married William Cunningham and together they raised their six children in Louisiana. William was a high school teacher and coach for over 30 years. Grace Jane was a homemaker until Steven reached kindergarten age. She completed college extension courses which allowed her to earn a teacher's assistant certificate and had a career of teaching children to read in the Louisiana School District for almost 20 years. William passed away in 1989. Three years later, Grace Jane became reacquainted with former classmate Robert Catlett at their High School reunion. They married in 1993. They lived happily together until Robert's death in 2002. Grace Jane developed a loving relationship with Robert's children Paul, Caroline, Erin, Susan, and Kathleen as well as Robert's grandchildren. In Grace Jane's later years, she became a published poet, a talented artist, avid golfer, and a civic leader. She was a member of Rotary Club, the Louisiana Housing Authority, PEO, Friends of the Library, Red Hat Society, and worked at the Louisiana Historical Society. She was a life-long member of the Centenary Methodist Church. Due to the Coronavirus Pandemic, there will be a private service for family only at this time with a celebration of life memorial to follow at a later date.

Grace Jane Cunningham Catlett, of Louisiana, passed away from natural causes on March 31, 2020 at the age of 95. She was preceded in death by her father and mother, Fred and Leonora Berry, her brother Fred Berry, Jr., her husbands, William R.... View Obituary & Service Information

The family of Grace Jane Cunningham Catlett created this Life Tributes page to make it easy to share your memories.

Grace Jane Cunningham Catlett, of Louisiana, passed away from...