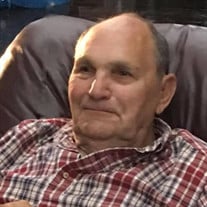 Mr. Glen Charles Cottrell, 80 of Louisiana, MO, passed away on Monday, May 10, 2021 at the Blessing Hospital in Quincy, IL. Funeral services will be held at 1:00 P.M. on Friday, May 14th, at the Collier Funeral Home in Louisiana, MO. Burial will follow at the Dover Cemetery near Clarksville, MO. Visitation will be held from 11:00 A.M. until 1:00 P.M. Friday at the funeral home. Glen was born on December 12, 1940 in Frankford, MO to Robert Cottrell and Anna Mae Stringer Cottrell. He was married to Rhonda Sue Harrison on June 12, 1966. He is survived by his wife, Rhonda Sue Cottrell, a son, Glen (Chuck) Cottrell Jr. (Amber) of Pittsburg, TX, a daughter, Laura Martin (Will) of Louisiana, MO, 6 grandchildren, Josh Martin (Crystal), Stephanee Barrett (Colin), Jenna Norris (Jared), Zachary Martin, Ashley Martin, and Tate Cottrell, 5 great grandchildren, Parker Splain, Sean Barrett, Julie Ann Barrett, Ryann Martin, and Addison Norris, a sister, Delores Burgmeyer (Dick) of Bowling Green, MO, 2 brothers, John Cottrell of Clarksville, MO and Nathan Cottrell of Springfield, MO, and numerous nieces and nephews. He was proceeded in death by his parents Robert and Anna Mae Cottrell, and three brothers, Russell, Richard (Butch), and Donald. Glen, known as “Pops” by friends and family was a long-time resident of Louisiana, MO. He was a member of the First Baptist Church. He worked as an auto mechanic for several years and was later employed at Dundee Cement Company, where he retired in 2002. He served his country as a member of the US Army. Glen’s love of cars and mechanical skill was obvious throughout his life. He was an avid racing fan and car show enthusiast. He was a member of the Loafers Car Club in Hannibal and continually brought home trophies from showing his pride and joy – a 1957 Chevy Bel-Air. Glen had a great love for sports and his family, rarely missing any of his children or grandchildren’s sporting events. He also enjoyed camping with his family. Pallbearers will be Glen’s grandsons, Josh Martin, Zach Martin, Tate Cottrell, Colin Barrett, Jared Norris, and Andrew Mudd. Honorary pallbearers will be his great grandsons, Parker Splain, and Sean Barrett. Memorials may be given to the American Parkinson Disease Association or donor’s choice in care of the funeral home.

Mr. Glen Charles Cottrell, 80 of Louisiana, MO, passed away on Monday, May 10, 2021 at the Blessing Hospital in Quincy, IL. Funeral services will be held at 1:00 P.M. on Friday, May 14th, at the Collier Funeral Home in Louisiana, MO. Burial... View Obituary & Service Information

The family of Glen "Pops" Charles Cottrell created this Life Tributes page to make it easy to share your memories.

Mr. Glen Charles Cottrell, 80 of Louisiana, MO, passed away on...

Send flowers to the Cottrell family.