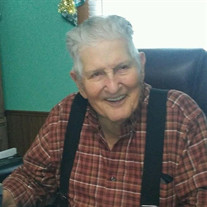 Services for Mr. Glen S. Clark, 92, of Louisiana, will be Thursday, February 8, 2018 at the Collier Funeral Home in Louisiana, Missouri. Visitation will be from 10:00 a.m. to 12:00 p.m. with the memorial service to be at 12:00 p.m. The Rev. Don Hannel will officiate. Mr. Clark passed away on Saturday, February 3, 2018 at St. Luke’s Hospital in Chesterfield, Missouri. Glen was born December 9, 1925 in rural Pike County, Illinois, the son of John William and Clara Isabelle (Scranton) Clark. He attended Pleasant Hill School in Pleasant Hill, Illinois. He was united in marriage to Rose Mary Anderson on February 12, 1949 in Jerseyville, Illinois. Glen and Rose Mary had three children: Coleen, John and Marta. Glen served in the US Army as a Field Medic for the 11th EVAC Hospital (MASH Unit) during the Korean War. Glen was a devoted family man and he didn’t know a stranger. He was a provider, be it advice or goodies from his garden. He also enjoyed fishing his entire life, especially his many trips with family and friends out on the Mississippi River. Even though he didn’t go much in the last few years, he still provided the grandest of fish tales to all in his company. You may have even seen him puttering around town on his ruby red scooter, with many visits to see friends and share hearty laughs at the Trimble House. He is survived by his daughters, Coleen Bryant and her friend Tom Backer and Marta Lawrence and her friend Tim Waddell of Louisiana, and his son John and Terri Clark of Moscow Mills. His grandchildren are Brian and Lori Bryant of East Brunswick, NJ., Roni Bryant of Louisiana, Deidra and Aaron Fairchild of Bowling Green, Kara and Eric Headrick of Moscow Mills, and Erin and Dane Gough of Washington, Missouri. His great-grandchildren are Ashley Corbin, Jadyn Branch, Xavier, Izabella and Zander Fairchild, Jack, Laney and Dane Headrick, and Abigail and Elliott Gough. He is further survived by his sister Anna Lee Buchanan, brothers-in-law Harry and Sue Stoddard and Donald and Joyce Stoddard and special sister-in-law Carolyn Sanderson, as well as numerous nieces and nephews. Glen was preceded in death by his loving wife Rose Mary, his parents, his brothers Carl, Lyndle and William Clark, and his sisters, Learta Shipley and Dorothy Mullins. Memorials can be made to Pike Nutrition Center or donor’s choice.

The family of Glen S. Clark created this Life Tributes page to make it easy to share your memories.

Send flowers to the Clark family.