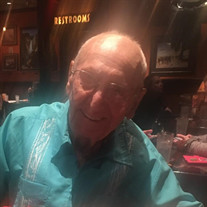 Mr. Gerald Eugene Smith, 90, of Louisiana, MO, passed away on Friday, May 11, 2018 at the Maple Grove Lodge Nursing Home in Louisiana, MO. Funeral services will be held at 12:00 P.M. on Monday, May 14, 2018 at the Collier Funeral Home in Louisiana, MO. The Rev. Randall Cone will officiate. Burial will be at the Riverview Cemetery in Louisiana, MO. Visitation will be held from 10:00 A.M. until time of service at 12:00 P.M. Monday at the funeral home. Gerald was born on March 24, 1928 in Louisiana, MO to Eugene Clay Smith and Mary Louise Smith. He was married to Betty Joe Morrison on November 19, 1949 in Hannibal, MO and she preceded him in death on May 28, 2015. He is survived by 3 daughters, Judy Suddarth (Ron) of Vandalia, MO, Barbara Dulle (Jim) of Maryville, IL, and Jeri Keeth (Bill) of Louisiana, MO, 4 grandchildren, Derek Suddarth (fiancé JaLee Gooch), Nathan Love (Shelby Hunter), Steven Love (Thressa Jones), and Jeffrey Love (Kelly), step-grandchildren, Shonda Moran, Sandy Ingersol, Kristopher Keeth (Janelle), and Cindy Keeth (Jon), great grandson, Cooper Love, and step-great grandchildren, Cannon Moran, Presley Moran, Ayla Marsh, Blake Marsh, Mayson Marsh, Damien Marsh, and Lexi Wiseman. He was preceded in death by his wife Betty Joe Smith, 2 brothers, Robert Smith and Harry Smith, a sister, Frances Williams, and a grandson, Jon Bergman. Gerald was a lifelong resident of Louisiana, MO. He was a veteran serving in the US Army during the Korean Conflict. He was employed by Hercules, Inc. in Louisiana, MO for 35 years retiring in 1989. He was a member of the American Legion Post #370 and the Louisiana Boat Club. He enjoyed his children and grandchildren was known as a “Mr. Fix it” for tinkering and fixing things. Pallbearers will be Derek Suddarth, Nathan Love, Steven Love, Jeffrey Love, and Curt Love. Memorials may be made to the American Diabetes Association in care of the funeral home.

The family of Gerald Eugene Smith created this Life Tributes page to make it easy to share your memories.

Send flowers to the Smith family.