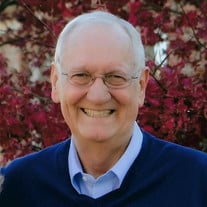 Mr. Gary Lynn Reeves, 71, of Chesterfield, MO, formerly of Louisiana, MO, passed away on Monday, April 16, 2018 at the Mari De Villa Home in Town and Country, MO. Funeral services will be held at 2:00 P.M. Thursday, April 19, 2018 at the Collier Funeral Home in Louisiana, MO. The Rev. Don Amelung will officiate. Burial will be at the Fairview Cemetery near Louisiana, MO. Visitation will be held from 1:00 P.M. until time of service Thursday at the funeral home. Gary was born on August 31, 1946 in Cape Girardeau, MO to Alvin Thomas Reeves Jr. and Gladys Lucille Duncan Reeves. He was married to Marilyn Jane Rule on November 24, 1967 in Louisiana, MO. He is survived by his wife, Jane Reeves, son Garret Reeves (Stefani) of St. Louis, MO, daughter Allison McGavin (Kyle) of Nashville, TN, 5 grandchildren, Sophia, Lyla, Camilla, Lucy, and Emmie, brother Tom Reeves (Dorothy) of St. Louis, MO, sister Jan Ott (Mark) of St. Charles, MO, brother in-law Richard Rule, sister in-law Carolyn Oliver (Robert), and nieces, nephews, and cousins. He was preceded in death by his parents, Alvin and Gladys Reeves, and a sister in-law, Sandra Pickens and her husband Bob Pickens. He was a graduate of Louisiana High School Class of 1964. He served in the Air Force National Guard from 1966 until 1972. He attended college in Kirksville, MO. Gary spent most of his life working in the barge industry in various capacities over the years, and he retired in 2011. Gary and his wife Jane celebrated their 50th anniversary last fall. He loved his 2 children and enjoyed his last few years with his grandchildren and retirement. Pallbearers will be Jeff Ott, Clint Mitchell, Michael Maguire, Bill Terhune, Tom Reeves, and Patrick Reeves. Memorial donations can be made to the American Cancer Society or to the Siteman Cancer Center in care of the funeral home. Online condolences may be sent at www.collierfuneral.com.

The family of Gary L. Reeves created this Life Tributes page to make it easy to share your memories.

Send flowers to the Reeves family.