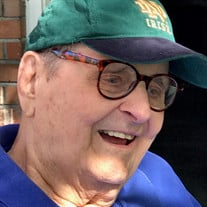 Mr. Fred Naxera III, a lifelong resident of Louisiana, passed away peacefully on Monday, September 3, 2018, at Mother of Good Counsel Home in St. Louis where he had resided since March of this year. Mr. Naxera was born in Louisiana on April 22, 1925, to loving parents, Fred Naxera Jr. and Mary Naxera (Zezula). His parents and grandparents left a deep imprint on Fred who was profoundly proud of his Bohemian ancestry and strived throughout his life to honor their hard work and courage. Fred enjoyed a vigorous and diverse life. In his earlier years, Fred relished adventures with his friends such as frog-hunting, playing cards and dancing. (The man could dance!) In high school, he was active in football, basketball, track and student government. A dutiful and popular young man, he was elected President of the student body during the challenging years of World War II. He graduated from Louisiana High School in 1943. Prior to graduation he enlisted in the US Navy at age seventeen like many others of “the Greatest Generation.” He enrolled in the V-5 Mid-Shipman’s training program of the Naval Air Corp and later was shifted into the V-12 program—the same accelerated program attended by the late President John F Kennedy. His training included concentrated studies at Northwest Missouri State College, Princeton University and Northwestern University. He received his commission at Northwestern and earned the rank of Lieutenant JG. He then served on the USS Solomon Aircraft carrier until the end of the war and continued serving his country as a member of the US Navy Reserves for many years. On May 13, 1950, he married Fern Imogene Griffith, making him “the happiest man alive.” They settled in rural Louisiana and together ran a business that included grain crops, cattle and swine. Though Mr. Naxera had strongly considered making the Navy his career, he grew to love farming and all it entails. Mr. Naxera worked hard and was a distinguished third generation farmer in Pike County. He built and operated the first hog confinement system in the county and his successful stewardship of his land and farming efforts earned the honor of Missouri Farm Family of the Year in the early seventies. Mr. Naxera was a man of deep yet simple faith and a life-long member of St. Joseph Catholic Church in Louisiana. He was also actively involved in the community, as President of rural BONCL elementary school for over 15 years; the oldest and longest serving member of Louisiana BPOE 0791 (seventy-five years); and member of the Louisiana VFW and the Louisiana American Legion Post 370, where he recently earned a cherished seventy-year member certificate. Most of all, Fred enjoyed the devotion of his wife and time spent with his children and friends. A reluctant traveler, preferring time spent on his own land, he was persuaded to and grew to enjoy wonderful trips with his wife and children throughout the US and several memorable trips to Europe. He loved drives throughout Pike County and the surrounding communities, always appreciating the hard work and efforts of his fellow farmers. Other interests included keeping up on latest in US markets, college football and basketball. In recent years he looked forward to keeping up with the activities of his children, grand-children, and great-grandchildren. Mr. Naxera is survived by four children, eight grand-children and two great-grandchildren. They include daughters Carolyn Patrice “Pat” Vallar (Dr. Mike) of Louisiana, Sally Naxera Benson of Naperville, IL, Nancy Zezula Naxera of Louisville, KY, his son, Fred Naxera IV of Louisiana; his grandchildren; Carrie Vallar Teeter (Dr. Miriah), Dr. Kelly Jean Vallar, Dr. Sarah Elizabeth Benson, Curtis Michael Benson, Matthew Scott Benson, Mackey Reese Middleton, Jacob Price Middleton and Molly Renae Naxera , great-grandchildren; Gavin Michael and Weston Vallar Teeter, brother-in-law TV Elder Sr, nieces and nephews Tim Vern Elder Jr, Rita Jo Elder Branstetter, Robert Fred Elder, Thomas and Ed Backer, Lisa Griffith Kent and Joseph Griffith. In addition to his wife and parents, he was preceded in death by his sisters Anna Naxera Elder and Mary Naxera Backer, brothers-in-law Buckner Backer and Myron Griffith, niece Mary Ann Elder Fox and son-in-law Gary Peter Benson. A Mass of Christian burial will be held at 2:00pm Friday, September 14, 2018, at the St. Joseph’s Catholic Church, Louisiana, MO with Fr. William Korte and Fr. Lou Dorn officiating. Interment will follow at the St. Joseph Catholic Cemetery. Visitation will be held from 10:00am until 1:30pm on Friday, September 14, 2018 at the Collier Funeral Home, in Louisiana, MO Serving as active pallbearers will be Curt Benson, Matt Benson, Mackey Middleton, J.P. Middleton, Charlie Chapuis, and Dick Rule. Honorary pallbearers will be Jim Pitzer, Jim Grimm, John Carroll, Sam Kilby, Charlie Pratt, Tim Ray, Carl Littrell, Otto Maly, and Danny LaRue. In lieu of flowers it is requested that donations be made to St. Joseph’s Church, the Elks Club, or your charity of choice. The family would like to thank Mother of Good Counsel Home nuns and staff for their loving care.

Mr. Fred Naxera III, a lifelong resident of Louisiana, passed away peacefully on Monday, September 3, 2018, at Mother of Good Counsel Home in St. Louis where he had resided since March of this year. Mr. Naxera was born in Louisiana on April... View Obituary & Service Information

The family of Fred Naxera III created this Life Tributes page to make it easy to share your memories.

Send flowers to the Naxera family.