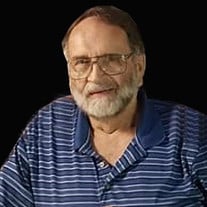 Frank (“Doc” and/or “Tom”) Thomalla III, 74, of Louisiana, MO, passed away on March 31, 2021. A Memorial visitation will be held from 5:00 P.M. until 8:00 P.M. on Thursday, April 8, 2021 at the Collier Funeral Home in Louisiana, MO. Doc was born on December 18, 1946 in Decatur, IL to Frank Jr. and Thelma (O’Dell) Thomalla. Doc was larger than life and freer than most, living life on his own terms. He grew up in Decatur and later attended Miami University of Ohio and Illinois State University and graduated from Washington University School of Dentistry in St. Louis in 1973. Doc enjoyed hunting, fishing, all manner of outdoor activities, collecting firearms, target shooting, pyrotechnics, and caring for his land. He loved to play golf until his knees failed him, and then he loved to watch it. His family and friends enjoyed years of incredible homemade fireworks shows as he celebrated his favorite holiday – the 4th of July. Doc was a voracious reader, a storyteller, and an all-around Renaissance man. Nothing was outside of his skill set. He was at ease performing delicate surgery, doing plumbing, fixing cars, playing the guitar, or raising hay. His head, according to his wife, was full of useless knowledge, but he could make any story spellbinding, whether it was about the invention of dry socket paste, the woman who survived the sinking of the Titanic AND its sister ship the Britannic, or Rembrandt’s masterpiece “The Night Watch.” Above all else, though, Doc loved animals, mostly dogs. He was responsible for rescuing dozens and dozens of dogs over his life, either taking them in himself or finding homes for them. He also sponsored many animal welfare organizations and other rescue organizations and individuals. If a dog was in trouble, he’d pull out his wallet and say “Save the dog.” He also loved cats and made a home for One-Eyed Jack the cat, whom he found in a dumpster, despite already having (too) many dogs. Many times, he had a rescue dog recuperating on his sofa. He was also mindful of wildlife conservation, and as an avid hunter, understood the balance of the ecosystem of his beloved Missouri hills. He would even rescue garden snakes who found themselves in the wrong place at the wrong time. Doc was an Illinoisan by birth, but made Pike County Missouri his home of choice, opening his dental practice there in 1973. He practiced steadily in Louisiana, MO for over 45 years, only retiring at the end of 2020. He had a stream of loyal patients that sometimes drove for hours to continue as his clients. He traveled to Alaska, British Columbia, and South Dakota for hunting trips, and later traveled with his wife around the country, but always preferred being at home. He thought his grandchildren hung the moon and there was nothing he wouldn’t do for his friends. Doc is survived by his wife Mary, who he married on October 1, 2009. He is also survived by daughter Leah (Kelly) Gregory of Troy, IL; son Jason Thomalla of Benton, AR; stepsons Adam (Amber) Carpenter and Shawn (Kayla) Carpenter, both of Pleasant Hill, IL; and grandchildren Olivia and Finn Gregory, and Wade Lipcamon, Nash and Grayson Carpenter, Haylee Rodgers, Harley Miller, Henley Jones, and Hazelee Carpenter. He is survived by brothers Chris (Dale) Thomalla of Duluth, MN, Vince (Gail) Thomalla of Marshfield, WI, and Anthony A. (Zarina) Thomalla of MN and WY, and by many cousins, nieces, nephews, great-nieces, great-nephews, and friends. Rest in peace, Doc. There is much joy on the Rainbow Bridge today as all the pets he has loved over the years greet their old friend. In lieu of flowers, the family asks that you donate to an animal rescue organization in Doc’s memory, such as the Northeast Missouri Humane Society, the Effingham County (IL) Humane Society, or any other group that helps animals.

The family of Frank Thomalla III created this Life Tributes page to make it easy to share your memories.

Send flowers to the Thomalla family.