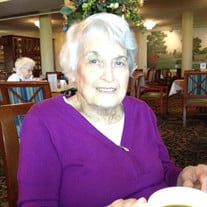 Frances Elene Berry Sturm, age 90, of St. Peters, MO, formerly of Louisiana, MO, passed away in the early hours of March 30, 2019. Frances had been a long-term resident of the Villages of St Peters in St. Charles County. Frances will be greatly missed by her four loving children, along with her caretakers who served Frances until her final moments. Frances was born in Louisiana, MO on January 20, 1929. She was the younger of two children. She attended elementary through high school in Louisiana. Frances was a graduate of William Woods College in Fulton, MO, receiving her Associate of Arts degree in 1949. After graduation, she moved to St. Louis and worked at Barnes Hospital in the Central West End. She met and married Frank G. Sturm in 1950. The couple had four children during their early years 1951-1958 in St. Louis. Frances returned to Louisiana, MO in 1965 to her beloved hometown. She continued to raise her children until they left home to start their adulthood years. Two of her daughters were graduates of William Woods University, one receiving a B.S. degree (Nancy) and the other, (Patty) a B.A. degree in the 1970’s. Frances had a heart for humanity, choosing to work serving others in the local Head Start program, the Louisiana school system, Smith-Barr Manor, and Pike County Memorial Hospital. Frances was a lifelong member of the First Baptist Church in Louisiana, MO. Frances was preceded in death by her parents Marie Boyd Berry and Alva Earl Berry of Louisiana, MO, her husband Frank G. Sturm of St. Louis in 1979, and most recently, her brother Earl Benton Berry of Louisiana in 2017. Frances is survived by her children, daughter Nancy Sturm Kohl and husband Arch of Jackson, MO; daughter Patty Sturm Marquitz and her husband Denny of Lake St. Louis, MO; daughter Janet Harrison of Creve Coeur, MO, and son Frank G. Sturm Jr. of St. Charles, MO. Her grandchildren, Emily Harrison and husband Michael Kinnaman of Reno, NV; Justin Harrison and his wife Kimberly of Glen Arm, MD; Andrew Kohl of Columbia, MO; Jason Kohl of Columbia, MO, and Kyle Sturm of Mexico, MO; and her great grandchildren, Jack, London, and Vivienne Kinnaman of Reno, NV; and Natalie Sinz, Luke and Maci Belle Harrison of Glen Arm, MD. Funeral Services will be held at 11:30 A.M. Wednesday, April 3, 2019 at the Collier Funeral Home in Louisiana, MO. The Rev. Bill Maupin will officiate. Visitation will be held from 10:30-11:30 A.M. prior to the service. Her final resting place will take place at Riverview Cemetery with a private graveside burial. The Sturm family would like to extend their loving gratitude to Tonisha Farmer for her unprecedented care of their beloved Mother and Grandmother. In lieu of flowers, voluntary contributions for Frances Berry Sturm’s memorial may be sent to Pike County Memorial Hospital in Louisiana, MO.

Frances Elene Berry Sturm, age 90, of St. Peters, MO, formerly of Louisiana, MO, passed away in the early hours of March 30, 2019. Frances had been a long-term resident of the Villages of St Peters in St. Charles County. Frances will be greatly... View Obituary & Service Information

The family of Frances Elene Berry Sturm created this Life Tributes page to make it easy to share your memories.

Send flowers to the Sturm family.