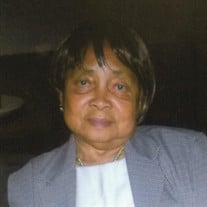 Mrs. Everlena Burse, 87, of Louisiana, MO, went home on Wednesday, December 25, 2019 at her residence in Louisiana, MO with her family by her side. Funeral services will be held at 1:00 P.M. on Saturday, January 4, 2020 at the First Presbyterian Church in Louisiana, MO. The Rev. Lonnie Parker will officiate. Visitation will be from 11:00 A.M. until time of service Saturday at the church. Cremation rites will follow in care of Collier Funeral Home in Louisiana, MO. Everlena was born on January 30, 1932 in Lee County, Arkansas to Lonnie and Lucille Parker. She was married to John Ben Burse, Sr. on January 20, 1951 in Arkansas. They had 12 children. In 1964, They moved to Louisiana, MO where they made a living with their children. Everlena worked at Louisiana Plastics for over 20 years before retiring and then became a full-time housewife. She loved to be around family and friends. She enjoyed Bingo, playing cards, and most of all, shopping with Izola and Ben, Jr. She loved her grandchildren and times in the backyard were unforgettable, from the dinners, or just sitting around, and the memories. She is survived by her children, Ben Burse, Jr. of Louisiana, MO, Roosvelt Burse (Delores) of Louisiana, MO, Lee Andrew Burse of California, Jerry Dean Burse (Almeter) of Texas, Izola Ivey of Louisiana, MO, Gus Burse (Janet) of Louisiana, MO, Vera Burse of Louisiana, MO, Denise Chatman (Anthony) of Louisiana, MO, Lawrence Valentine (Brenda) of Michigan, Kenny Thomas (Sandra) of Texas, and Carol Burse of Louisiana, MO, 3 sisters, Bessie Bennett of Michigan, Lottie Parker of Michigan, and Earlene Pettigrew (Fredrick) of Michigan, a brother, Rev. Lonnie Parker (Alice) of TN, and 47 grandchildren, 117 great grandchildren, and 62 great great grandchildren. She was preceded in death by her parents, Lonnie and Lucille Parker, her husband, Ben Burse, Sr., one son, Tom Burse III, 3 daughters, Pam Burse, Mary Alice Burse, and Shemia Burse, 4 sisters, Essie Lee Mabon, Clotie Turner, Doveanna Beasley, and Deloris Parker, and grandchildren, Dionne Burse, Rosetta Powell, Domonique Powell, Secara Burse, Arianna Burse, and Kaleo Dade. Honorary pallbearers will be Kenny Griffith. Wilford Moore, Lee Andrew Burse, Jerry Dean Burse, Roosvelt Burse, and Ben Burse, Jr. Active Pallbearers will be Justin Burse, Tordale Chatman, Jason Chatman, Carlos Davis, Thomas Burse, and Jeremy Miller. Memorial donations may be made to the family in care of the funeral home.

Mrs. Everlena Burse, 87, of Louisiana, MO, went home on Wednesday, December 25, 2019 at her residence in Louisiana, MO with her family by her side. Funeral services will be held at 1:00 P.M. on Saturday, January 4, 2020 at the First Presbyterian... View Obituary & Service Information

The family of Everlena Burse created this Life Tributes page to make it easy to share your memories.

Send flowers to the Burse family.