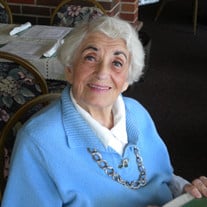 Elizabeth A. Wills, 95, of Louisiana, MO passed away on Wednesday, August 28, 2019. She was born on September 24, 1923 in Cologne, Germany, to Wilhelm and Alice Lion Gombert. She was preceded in death by her father, Wilhelm, a famous opera singer with the German State Opera in Berlin, and mother, Alice, a Swedish national and a concert pianist; her two older brothers, Hans and Dieter Gombert; her beloved husband, Otto and their daughter, Kathryn Elizabeth Wills Shepherd. She is survived by her a niece Angie Coppi (Verne), great-nieces Samantha and Claire Coppi, nephew Dale Gombert (Lorri), niece Holly Gombert Young (Jim), and son-in-law, Tom Shepherd. Elizabeth was a child actress, appearing first at age 3 in the opera “Madame Butterfly” and as an adult joined the Germany Repertory theater. More recently she was active in the Raintree Arts Council in Clarksville, MO. Her early education was in a convent school in Belgium where everyone spoke French. She fled the school on foot, along with all students and nuns, as Belgium was being bombed by the Nazis. When she got home to Berlin, the family was also bombed nightly by the Allies. The worst part of the war for civilians was to sit helplessly in underground air raid shelters or the basements of your home during increasing bombings. Life was difficult for both Elizabeth and her husband because both of their mothers were Jewish. Elizabeth and Otto Willenbuecher were married in 1945 and were smuggled out of Berlin in 1946 by an American soldier. They lived in Sweden for about two years before coming to the United States in 1949. The best year of their life was in 1954 when they received their American citizenship and they changed their name to Wills. They were so grateful to this country for taking them in and for all their opportunities here. They always thought of themselves first as Americans. Living and working in New York City, the couple learned two different English languages. Otto worked with Italians and picked up their colorful language while Elizabeth spoke like her Yiddish colleagues in the garment industry. The television was their best tutor. Elizabeth’s career in the states began as a cleaning woman, to foreign language secretary for Mr. Bloomingdale of the Bloomingdale’s Department Store, to school teacher and finally, in 1964, to liaison secretary for the NATO forces with McDonnel Douglas Aircraft, translating all the technical conversations. Elizabeth and Otto retired to their weekend farm in Curryville, MO in 1977 and immediately Elizabeth became the Sunday school Superintendent of the Presbyterian Church, President of Business and Professional Women, President of Pike County Homemakers Extension Clubs and more. Ten years later they moved to their home on Hwy D in Louisiana, MO. Elizabeth was a guest speaker on many occasions on subjects such as the education system in her native Germany, what the American flag means to an immigrant and the horrors of WWII including the Holocaust. At her request, her cremated remains will be buried at a later date next to those of her husband, Otto, in Buffalo Cemetery. Loved by many, she will be missed.

Elizabeth A. Wills, 95, of Louisiana, MO passed away on Wednesday, August 28, 2019. She was born on September 24, 1923 in Cologne, Germany, to Wilhelm and Alice Lion Gombert. She was preceded in death by her father, Wilhelm, a famous opera... View Obituary & Service Information

The family of Elizabeth A. Wills created this Life Tributes page to make it easy to share your memories.

Elizabeth A. Wills, 95, of Louisiana, MO passed away on Wednesday,...

Send flowers to the Wills family.