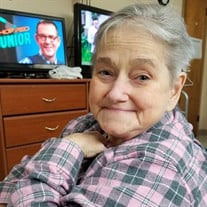 Mrs. Edith “Edie” Dove, 71, of Louisiana, MO, passed away in peace on Saturday, December 21, 2019 at the Maple Grove Lodge Nursing Home in Louisiana, MO. Please join a memorial luncheon as we celebrate the life of my mom, Edith ‘Edie’ Dove. The luncheon will be held from 12pm – 4pm on Saturday, January 18, 2020 at the American Legion in Louisiana. She was born on May 2, 1948, the daughter of Simon and Bessie Hubbard Howard. She went to school at Clopton, and graduated in 1968. After graduation, she started work as a nurse’s assistant, and that’s what she did her entire life, until she retired in 2010. Mom loved family. She loved people being near. She didn’t need a lot of attention from anyone, she was always content just knowing that her family was there. She was known as a woman who would “give you the shirt off her back, and give you her last dollar, even if she needed it more”. She loved having dinners and family gatherings, and always looked forward to the next one. She had a daughter, Rebecca Lynn Arttus, born March 10, 1973, who did not survive. I, Wendy Lindsay (married to Mike, Jr.), am her only surviving child. I have three children, Brett, Lindsey, and Kayden Weimer; Mike has two children, Kayla and Brandon Lindsay, whom I consider my own and Mom considered them her own grandchildren also. On March 14, 1987, Mom married the love of her life, George Dove. He had three children, Sherrie Dove Arnold (married to Jarad); Sherrie has three children, Christopher Miller, Sarah Miller, and Clayton Miller; Victor Dove (married to Angie), and Donald Dove; Donald has four children, Austin, Brent, Wyatt, and Sofia Dove. Mom loved George’s kids and grandkids as her own, from the time she started her life with him until the day she took her last breath. George preceded her in death on their 27th wedding anniversary, March 14, 2014. She was a sister to 13 siblings. Preceding her in death were three brothers, Clifford Howard, Pat Howard, and Dale Howard; and four sisters, Jean Harding, Dorothy Colbert, Helen Honey, and Mary Jo Henderson. She is survived by one brother, David Howard, and five sisters, Doris Bartkowiak, Lou Darnell, Vickie Bowen, Waivie Howard, and Roberta Howard. Mom was a favorite “Aunt Edie” to so many of her nieces and nephews. She loved them so much, she considered many of them her own children as well. Many moments with them made her laugh until she cried! In May of 2019 her health took a serious turn. It was a hard decision, but she and I together talked about putting her in a nursing home. She went to Maple Grove Nursing Facility on a trial basis for therapy, and ultimately decided on her own to stay there. During her short time there, she grew to love the nurses and staff as her own family, and they adored her and treated her as if she was their mother and grandmother. During her final days, all she could talk about was getting back home to Maple Grove. Her wishes were granted, and on the evening of Friday, December 20, she was transported back there from a two-week hospital stay, to be put on the hospice program. She smiled from ear to ear when she got back in those doors. She kept telling me she was so very happy to be back home; back with all of the staff there, and back with her very special friend and roommate, Loretta Law. In the very early morning hours of December 21, God decided to call her home to be with Him, and so many family members who were waiting with open arms to greet her. The loss of my mom, Edie Dove, leaves a void in our lives that no one else will ever be able to fill; but her life is one that I and many others will continue to celebrate, until we see her again in heaven. Rest in Peace, Beautiful Angel. Memorial donations may be made to the Pike County Home Care and Hospice. Cremation rites were provided by Collier Funeral Home in Louisiana, MO.

Mrs. Edith &#8220;Edie&#8221; Dove, 71, of Louisiana, MO, passed away in peace on Saturday, December 21, 2019 at the Maple Grove Lodge Nursing Home in Louisiana, MO. Please join a memorial luncheon as we celebrate the life of my mom, Edith... View Obituary & Service Information

The family of Edith "Edie" Dove created this Life Tributes page to make it easy to share your memories.

Send flowers to the Dove family.