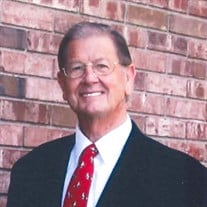 Duey “Dude” Branstetter, 93, of Louisiana, Missouri passed away on Sunday, February 6th, 2022 at Pike County Memorial Hospital in Louisiana. Funeral Services will be held at 11:00am on Saturday, February 12th at Collier Funeral Home in Louisiana. The Reverend James Spear will officiate. Burial will be in Buffalo Cemetery with military honors provided by the American Legion Post #370. Visitation will be Saturday, February 12th from 10:00am until time of service at the funeral home. Dude was born at home on June 15th, 1928 in Louisiana, Missouri. He was the son of Duey Branstetter Sr. and Nora Bell (Hudson) Branstetter. He was educated in Louisiana schools and graduated from high school in the class of 1947. He joined the United States Marine Corps in 1948 serving our country for 4 years. He worked for the railroad for several years before starting his job with Missouri Edison. He married his high school sweetheart Sarah Jane (Reed) Branstetter. Their marriage took place on June 9th, 1956 in Piedmont, Missouri. They were married for 61 years before her passing in 2017. He spent his professional life working 36 years for Missouri Edison Company and Union Electric Company now Ameren. He started working for Missouri Edison as a custodian after school when he was in high school, then served as a lineman and ended his career as the District Manager for the last 23 years of his service with the company. Dude was a member of the First Christian Church, Elks Lodge #791, and American Legion Post #370. He served on many committees and organizations in Louisiana throughout his life. He enjoyed golf, entertaining friends, and traveling. Those surviving are his daughter, Debra Hunter and husband Rob of Fulton, Missouri. His granddaughter Lauren Haskins and husband Jacob of Springfield, Missouri. His brother in-law John Reed and wife Mary of Eolia, Missouri. His sister-in-law Mary Ann Reed of Wisconsin, as well as many nieces and nephews. He was preceded in death by his beloved wife Sarah Jane. His father Duey Branstetter and his mother Nora Branstetter. In lieu of flowers, memorials can be made to the donor’s choice.

The family of Duey "Dude" Branstetter created this Life Tributes page to make it easy to share your memories.

Send flowers to the Branstetter family.