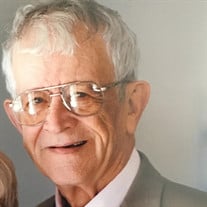 Donnie Gene Mirick, 86, of Clarksville, MO, passed away on June 26, 2019 in Clarksville, MO. Funeral services will be held at 2:00 P.M. on Sunday, June 30, 2019 at the Collier Funeral Home in Louisiana, MO. Mr. Dave Meers will officiate. Visitation will be held from 4:00 P.M. until 7:00 P.M. on Saturday, June 29, 2019 at the funeral home. Donnie was born in Yukon, Oklahoma on December 19, 1932 to Elmer and Connie Mirick. His family moved to Buckeye, Arizona when he was young. Once in a great while, he would share stories of the financial hardships his family went through and how all the kids in the family had to pitch in and work. One of most notable stories is when it came time for Don to graduate from high school, he had all the required credits, but he owed a small library fine and couldn’t pay it, so he wasn’t allowed to graduate. Like many young men back in the 50s, Don joined the service as a way to better himself. He earned his GED and went on to attend college classes as well. While at home on leave one summer in 1956, he met Helen Windmiller at a little diner in Buckeye. She had traveled to Buckeye from Clarksville, Missouri to help an aunt who was recovering from surgery. Taking a bet from a buddy that he couldn’t get a date with Helen, he took a chance. Don and Helen were married three months later at Langley Air Force Base in Virginia on September 1, 1956. They shared 62 years of marriage and raised two children together, Donnie G. Mirick II and Laura Jane Mirick. Don retired from the Air Force in 1973 after 22 years of service and they chose Helen’s hometown of Clarksville, Missouri as their residence. Don started a second career with the Army Corps of Engineers working at both the Winfield Lock & Dam and the Clarksville Lock & Dam and retired from there after 20 years of service. He received high praise, recognition and promotions from commanding officers and bosses throughout his career. He had a strong work ethic. One of the things that was definitely instilled in him in the service was to be on time to work or anywhere for that matter, “you have to arrive early”. The main thing that Don would want to be remembered for was his love for Jesus Christ, his wife and his family. His grandchildren and great grandchildren were his pride and joy and they all have sweet memories of time spent with Grandpa. He was a member of Edgewood Baptist Church and previously Ramsey Creek Baptist Church, where the love and caring nature of his church family meant the world to him. Don was preceded in death by his son, Donnie G. Mirick II and his grandson, Michael Ryan Robinson. He is survived by his loving wife of sixty-two years, Helen Mirick, his daughter, Laura Robinson (Davey) of Clarksville, MO; granddaughter, Jessica Spoonster (Bobby) of Eolia, MO; grandson, Davey Robinson (Danielle) of Bowling Green, MO; and seven great grandchildren, Tinleigh, Charleigh, Trey, Paisleigh and Tate Spoonster of Eolia, MO, and Liam and Owen Robinson of Bowling Green, MO. He is also survived by his sister-in-law, Linda Blakey (Bill) of Clarksville, MO. In lieu of flowers, memorials may be made to Edgewood Baptist Church or Greenwood Cemetery in Clarksville, MO.

The family of Donnie G. Mirick created this Life Tributes page to make it easy to share your memories.

Donnie Gene Mirick, 86, of Clarksville, MO, passed away on June...

Send flowers to the Mirick family.