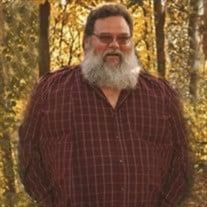 Christopher Dale Stark, 57, of Louisiana, Missouri, passed away peacefully, surrounded by his family on Monday, August 9, 2021. A Life Celebration will be held Saturday, August 14, 2021 at the Pike County Fairgrounds in Bowling Green. Doors will open at 4:00 p.m. Services will begin at 5:00 p.m., with Deacon Mark Dobelmann officiating. Dinner will be at 6:00 p.m., followed by entertainment by J.W. Fulton. Chris was born on January 5, 1964 in Louisiana, Missouri, the son of Anthony Herman and Emma Jean Capps Stark. He graduated from Louisiana High School in 1982. He obtained his EMT license and worked over 20 years at Pike County Memorial Hospital. He was part of the Louisiana volunteer fire department for 18 years. Chris also worked at Pike Medical Clinic for many years. Upon retirement from the medical field, he was very active in the Louisiana School District, cooking for the concession stand at all the home games, working at the concession stand, helping with the chain gang at the home football games, and driving the school bus. You would also find him at the Louisiana ball fields; watching games, visiting, or cooking for the concession stand. In the winter months, you may find him assisting Santa Claus, taking children’s wishes. Currently, Chris was serving his fifth year as the Pike County Coroner. Chris was preceded in death by his parents and four unborn children. He is survived by four children: Alissa (Donald) Moore, Alexa Stark, Collin (Lauren) Stark, and Caden Stark; four grandchildren: Hadley and Drake Moore, Berklee Dowell, and Averie Stark; three siblings: Tony (Jane) Stark, Terri (John) Clark, and Brad (Terry) Stark; along with many nieces, nephews and friends. To know Chris was to know the biggest teddy bear you would ever meet. His smile and laugh were contagious. His compassion for people made him an excellent fit for his role in the community and he never knew a stranger. Chris’ last wish was to have a true “celebration” of his life. The family has created an account for a scholarship fund in memory of Chris. In lieu of flowers, donations for the fund can be made at Mercantile Bank in Louisiana, Missouri. In his words, “I’m fat and sassy, and not necessarily in that order!”

The family of Christopher Dale Stark created this Life Tributes page to make it easy to share your memories.

Send flowers to the Stark family.