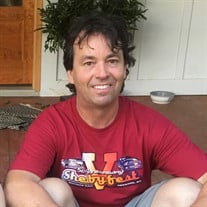 Christopher “Chris” Paul Brown, 52, of Louisiana, passed away Sunday, June 27, 2021 at his home. A Celebration of Life will be held on Friday, July 2, 2021 at 1:00 p.m. at Brown’s Auto Body in Louisiana. Collier Funeral Home is handling the arrangements. Chris was born September 14, 1968 to Clarence “Socko” and Dorothy Jane Brown (Murray). He was united in marriage to Lisa on December 10, 1986 in Clayton, Missouri. She survives. Also surviving are his mother, Dorothy Jane Brown-Murray and step-father John Murray; sons, Hunter Brown (Kaitlyn) and Spencer Brown; daughters, Shelby Boswell (Matt) and Ashley Chamberlain (Coleman); five grandchildren: Maxwell Chamberlain, Macen Chamberlain, Monroe Chamberlain, Maverick Chamberlain, Charlie Boswell, and one on the way; brothers: Theodore Brown, Steven Brown, and Timothy Brown; and sisters: Stacy Grover, Pennye Lentes, and Cynthia Brown. Chris was preceded in death by his father, Clarence “Socko” Brown and a brother, Jefferson Brown. Chris grew up in Louisiana. He joined the United States Air Force in 1986 and was stationed in Virginia with Lisa and Ashley, and served in Desert Storm. The family moved back to Louisiana after his service. Chris started his business, Brown’s Auto Body, in 1991. He was world-renowned for his restoration excellence of classic cars, for which he received hundreds of awards. Chris was a member of the Show Me Mustang Club, a Barrett Jackson Car Auction participant, and was also featured in Mustang Monthly. His favorite pastime was working in his garage, restoring old Mustangs while listening to music. He enjoyed spending time with his wife, children, and grandchildren. No matter how busy Chris was, he always made time for his family and friends. Chris was well-known, and touched many people during his lifetime. He will be greatly missed by all who knew him. Memorials may be made to the Muscular Dystrophy Association for CMT disease in care of the funeral home. Online condolences may be made at www.collierfuneral.com

The family of Christopher "Chris" Paul Brown created this Life Tributes page to make it easy to share your memories.

Send flowers to the Brown family.