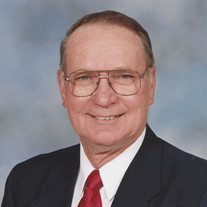 Mr. Chester Irwin Loesing, 84, of Louisiana, Missouri passed away Tuesday, June 2, 2015 at the Gamboa Resort in Gamboa, Panama. Funeral services will be held at 11:00 a. m. Saturday, June 20, 2015 at the Trinity Lutheran Church in Louisiana. Pastor Jeffrey Dock will officiate. Visitation will be held from 4 to 8 p.m. Friday, June 19th at the Collier Funeral Home in Louisiana. Burial will be in the Fairview Cemetery near Louisiana. Chester was born January 20, 1931 in St. Louis, Missouri the son of Hugo H. Loesing and Ida Trampe Loesing. He married Carol Ann Meyer May 10 1958 in Florissant, Missouri and she preceded him in death June 9, 1988. He is survived by one son; Cary Loesing (Kim), two daughters; Cathy Bartolotta and Cindy K. Standley (Jerry), 7 grandchildren; Chet Loesing (Erica), Joanna McCall (Nick), Marissa Giangrosso (Dominic), Kaitlin Bartolotta, Adam Feather, Brandi Feather and Bradford, Feather of St. Charles, Missouri, 2 great grandchildren; Henry Loesing and Gabriel McCall and a constant companion, Jane Bell of Louisiana, Missouri. Chester was preceded in death by his parents Hugo and Ida Trampe Loesing and one brother, Leroy Loesing who died in 1996. He graduated from the Hyatt Grade School in St. Louis, Missouri and obtained his GED after entering the Army. He was a veteran serving with the United States Army during the Korean Conflict. Chester had been employed by the United States Postal Service for 34 years. He was Postmaster of the Louisiana Post Office from 1976 until his retirement March 31, 1989. He was baptized February 8, 1931 at the Salem Lutheran Church in Black Jack, Missouri. Chester was an active member of the Trinity Lutheran Church in Louisiana. He had served as an Usher and on the Board of Trustee’s. He was a member of the Veterans of Foreign Wars American Legion Post 370 in Louisiana and a longtime member of the Louisiana Lions Club where he was chairman of the Sight Committee. Chester enjoyed Woodworking, Fishing, Hunting, Gardening, Walking and being a” Shade Tree Mechanic” in his spare time. Honorary pallbearers are; Joanna McCall, Marissa Giangrosso, Kaitlin Bartolotta, Brandi Feather, Erica Loesing and Sara Rogers. Active pallbearers are; Chet Loesing, Adam Feather, Bradford Feather, Nick McCall, Dominic Giangrosso and Jeff Bell. Memorials may be given to the American Heart Association or to the Trinity Lutheran Church in care of Collier Funeral Homes, Inc., 117 Barnard Dr., Louisiana, MO 63353.

Mr. Chester Irwin Loesing, 84, of Louisiana, Missouri passed away Tuesday, June 2, 2015 at the Gamboa Resort in Gamboa, Panama. Funeral services will be held at 11:00 a. m. Saturday, June 20, 2015 at the Trinity Lutheran Church in Louisiana.... View Obituary & Service Information

The family of Chester Irwin Loesing created this Life Tributes page to make it easy to share your memories.

Send flowers to the Loesing family.