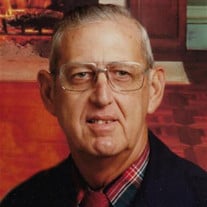 Charles “Bud” Sparks, 86, of Clarksville, MO, passed away peacefully at his home surrounded by his loving family on Wednesday, January 30, 2019. Funeral services will be at Collier Funeral Home in Louisiana, MO, at 1:00 pm on Tuesday, February 5, 2019. Visitation will be from 5:00 - 8:00 pm on Monday, February 4th at the funeral home. Pastor Kevin Collins and Bro. Alvin Young officiating. Interment will be at the Fairview Cemetery in Pike County near Louisiana, MO. Memorials are suggested to the Cemetery and may be entrusted with Collier Funeral Home, 117 Barnard Drive, Louisiana, MO, 63353. Charles Frederick “Bud’ Sparks was born in rural Pike County, MO, on May 25, 1932, the son of Ralph and Rosa Mae (Brown) Sparks, who preceded him in death. He attended rural schools in Pike County and Louisiana High School. From an early age Charles traveled with his father in the truck as they transported livestock to St. Louis. This created in him a love for the trucking business. He served in the United States Army from 1954-1956. Bud married Catherine Elizabeth “Kitty” Cox in Louisiana, MO, on April 22, 1956, and she survives at home. Bud and Kitty first made their home in Louisiana where Bud drove a tank truck for Rogers Cartage. They moved to rural Clarksville in 1966 and have lived in the same house ever since. Bud continued to drive for Rogers for several years where he won several state and national awards, including Missouri State Truck Rodeo Champion. Bud drove professionally for over 50 years accumulating over 3 million accident- free miles. He served as teamster steward for the local out of Hannibal. When Rogers closed their terminal, Bud drove for other companies including Hunt Concrete, Louisiana Plastics, and American Botanicals. Bud loved the outdoors. He loved to boat and water ski on the Mississippi River and he was especially fond of deer hunting, taking a couple of trips to Colorado to hunt in his younger years. Bud was an exceptional “shade tree” mechanic and had a knack for figuring out how to fix things and making all kinds of repairs on just about anything. He was a man of deep personal faith in the Lord, serving at one time as a deacon at Grassy Creek Baptist Church. Bud was also a man with great integrity and values and tried to pass those along to his family. In addition to his wife, Bud is survived by two daughters, Brenda (Kevin) Collins, of Powersville, MO, and Vicky (Paul) Aldridge of Clarksville, MO, as well as a foster son, Bill (Tresea) Myers of Norfolk, VA. Bud is also survived by two grandsons, Jacob (Courtney) Collins and John Aldridge, three great grandchildren, Jaymie, Harlee, and Timber Collins, and a host of nieces and nephews who found the farm of Bud and Kitty a wonderful gathering place. Bud is also survived by members of the Hake family: Karla Libbert, whom he loved like a daughter, Alan, and Charles. Bud was also preceded in death by two sisters, Lena Sue Coy and Martha Grove and three nephews, Randy Coy, Charles and David Cox.

Charles &#8220;Bud&#8221; Sparks, 86, of Clarksville, MO, passed away peacefully at his home surrounded by his loving family on Wednesday, January 30, 2019. Funeral services will be at Collier Funeral Home in Louisiana, MO, at 1:00 pm on Tuesday,... View Obituary & Service Information

The family of Charles "Bud" Sparks created this Life Tributes page to make it easy to share your memories.

Send flowers to the Sparks family.