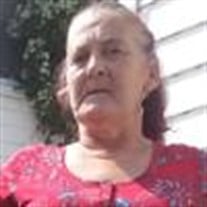 Mrs. Cathleen R. Dameron, 62, of Louisiana, MO, passed away on September 17, 2018 at her home in Louisiana, MO. A memorial service will be held at 1:00 P.M. on Saturday, October 6, 2018 at the First Baptist Church in Louisiana, MO. The Rev. Bill Maupin officiating. Cathleen was born on June 5, 1956 in Columbus, Ohio to Charles Adams and Medrith Louise McCafferty Adams. She was married to Douglas Lewis and he preceded her in death in 1974. She later married Gerald Dameron and he preceded her in death in 2010. She is survived by a son John Curtis Lewis (Samantha Hager) of Louisiana, MO, a daughter, Thelma Baker (Chris Turnbaugh) of Louisiana, MO, 7 grandchildren, J. D. Lewis, Brin Baker, Austin Lewis, Rebecca Lewis, and Catrina Turnbaugh all of Louisiana, MO, and Samantha Lewis and Cody Moberley of Ohio, several great grandchildren, a brother, Charles Adams of Ohio, 2 sisters, Bonnie Hamilton of Ohio, and Constance Rest of Bowling Green, MO, and a step-daughter, Jeannette Dameron of Paducah, KY. She was preceded in death by a son Douglas Ray Lewis, Jr. in 1994. She was born and raised in Columbus, Ohio. She had worked at White Castle for 10 years while living there. After moving to Louisiana, MO she worked at Smith-Barr Manor and then Maple Grove Lodge nursing homes as a Certified Nurses Assistant until her retirement. She loved her grandchildren and spending time with them, and she loved her cats and enjoyed taking care of them. Collier Funeral Home in Louisiana, MO was in charge of arrangements.

The family of Cathleen R. Dameron created this Life Tributes page to make it easy to share your memories.

Send flowers to the Dameron family.