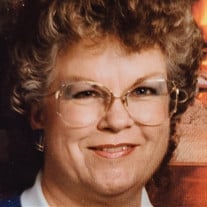 Catherine "Kitty" (Cox) Sparks, 82, of Clarksville, Missouri, passed into her Savior’s arms at her daughter Vicky’s home surrounded by her loving family and good friend and neighbor, Bill Sterne, on Thursday, August 6, 2020. Funeral services will be held at 1:00 P.M. on Tuesday, August 11, 2020 at the Collier Funeral Home in Louisiana, MO. Rev. Kevin Collins will officiate. Burial will be at the Fairview Cemetery near Louisiana, MO. Visitation will be held from 5:00 P.M. until 8:00 P.M. on Monday, August 10th at the funeral home. Kitty was born in rural Pike County, Missouri, on November 6, 1937, the daughter of Ira and Myrtle (Griffith) Cox, who preceded her in death. She attended rural schools in Pike County and Louisiana High School. Kitty married Charles "Bud" Sparks in Louisiana, Missouri, on April 22, 1956. Bud and Kitty first made their home in Louisiana where Bud drove a tank truck for Rogers Cartage. They moved to rural Clarksville in 1966 and lived in the same house until Bud passed away in January of 2019. Kitty was the spiritual influencer of her immediate and extended family. Her home was the central gathering place for all her family, including nieces and nephews who sometimes stayed for days at a time. Kitty searched high and low for a table big enough for everyone to eat together when they came to the farm, where everyone found the home of Uncle Bud and Aunt Kitty`s a wonderful and favorite gathering place. Kitty had a servant’s heart and acted as caregiver to her mother, her father-in-law, Ralph Sparks, Bud’s two aunts, Lena and Margaret Brown, and her sister-in-law, Sue Coy. She homeschooled her grandson, John, from 1st grade through High School. She was also a faithful prayer warrior. And, even though she really didn't like driving the boat, she would do it so Bud could ski. Kitty is survived by two daughters, Brenda (Kevin) Collins, of Powersville, Missouri, and Vicky (Paul) Aldridge of Clarksville, Missouri, as well as a foster son, Bill (Tresea) Myers, of Norfolk, Virginia. Kitty is also survived by two grandsons, Jacob (Courtney) Collins, and John Aldridge, three great-grandchildren, Jaymie, Harlee, and Timber Collins, and a host of nieces and nephews who found her home a warm and inviting place. Kitty is also survived by the members of the Hake family who have been the closest of friends for years; Cordie Hibdon, Karla Libbert, Alan and Charles Hake. Kitty was also preceded in death by a brother, Ira William Cox, and four nephews, Randy Coy, Charles and David Cox and Tony Coy. Memorials are suggested to Heartland Hospice and may be entrusted with Collier Funeral Home, 117 Barnard Dr., Louisiana, MO, 63353.

The family of Catherine "Kitty" E. Sparks created this Life Tributes page to make it easy to share your memories.

Send flowers to the Sparks family.