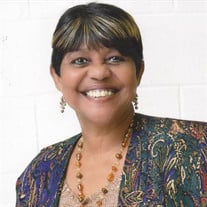 Mrs. Carrie Lee Scott Lanon, 60, of Hannibal, Missouri formerly of Paynesville, Missouri passed away Tuesday, November 24, 2015 at the University Of Missouri Medical Center in Columbia, Missouri after an 18 month battle with pancreatic cancer. Funeral services will be held at 2:00 p.m. Monday, November, 30, 2015 at the Collier Funeral Home in Louisiana, Missouri. The Rev. Faye Vaughn assisted by The Rev. Mary Garrett will officiate. Burial will be in the Greenwood Cemetery in Clarksville, Missouri. Carrie was born August 18, 1955 in Louisiana, Missouri the daughter of, Lewis Richard and Ida Hammuck Scott. She grew up in Paynesville, Missouri and graduated from the Clopton RIII School in 1973. She then attended and graduated from the Gem City Business College in Quincy, Illinois. Carrie had one son, Cortez Eugene McDonald and they moved to Savannah, Georgia. She married John R. Lanon January 18, 1983 in Savannah, Georgia. Carrie is survived by her mother, Ida Hammuck Scott of Paynesville, Missouri, her husband of 33 years John R. Lanon of Hannibal, Missouri, a son, Cortez Eugene McDonald of Paynesville, Missouri, cousin; Virginia Starks of Louisiana, Missouri and many special Uncles, Aunts and Cousins. Carrie also leaves behind her Clopton classmates of the year of 1973 that rallied together and supported her in many ways during her illness. She had been employed as a Secretary for the Louisiana Middle School for a number of years. She later worked at the JC Penny’s store in Hannibal, Missouri then was employed with the Hannibal School District with special needs children getting them on and off the school bus. The year before she got ill Carrie was self employed starting CLL Cleaning Services. She was a member of the 2nd Christian Church in New London, Missouri where she was baptized and was an active member of the choir which she loved. Pallbearers are; Albert Lawson, Gary Bell, Darrell Chatman, Randy Lovell, Dale Herring and Bruce Canon. The VFW in Clarksville will be serving the funeral meal after the burial.

The family of Carrie Lee Lanon created this Life Tributes page to make it easy to share your memories.

Send flowers to the Lanon family.