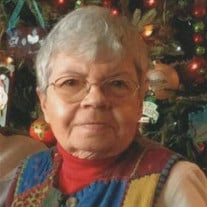 Mrs. Carolyn Jane Moss Geery, 79, of Louisiana, MO, went to be with the Lord on Sunday, November 24, 2019. Funeral services will be held at 2:00 P.M. on Sunday, December 1, 2019 at the Collier Funeral Home in Louisiana, MO. Mr. Steven Ince will officiate. Burial will be at the Jordan-Buffalo Cemetery near Louisiana, MO. Visitation will be held from 12:00 P.M. until time of service on Sunday at the funeral home. She was born on January 20, 1940 to Marvin and Margaret Moss. She grew up in Bowling Green, MO and graduated from Bowling Green High School in 1958. On April 3, 1959, she married the love of her life, Everett Wallace Geery whom she missed dearly for 26 years. She worked for Dr. Bilyea’s office for several years before taking time off to raise her son, Mike, then returned to work at Stark Bros. Nursery in 1979 retiring after 25 years of service. She was very active in Elmwood Church holding terms as Elder and teaching Sunday school for several years, which gave her great satisfaction. She enjoyed politics, Mizzou Football, appetizers, crocheting, needlepoint, and being outdoors on the farm. But, most of all she enjoyed spending time with all of her family members whom she loved with all her heart. She was small, but Mighty with a heart of Gold. She was preceded in death by her parents, her husband, mother in-law, Hazel Luck, father in-law, Everett Geery Sr., 2 sisters in-law, Loretta Moss and Carolyn Luck, and a brother in-law, John A. Luck. She is survived by her son, Mike Geery (Nancy), sister, Francis Morrison (Aubrey), brother, Shurl Moss, mother in-law, Helen Geery, a sister in-law, Janet Luck Miller, 2 step grandchildren, 7 step great grandchildren, and very close nieces and nephews. Honorary pallbearers will be Randy Treadway, John Shade, Mark Shade, Randy Shade, Jerry Smith, David Cadwallader, Ovalta Bell, Bob Jeffries, Hayden Adkison, Terry Cook, and Bryan Brandenburger. Active pallbearers will be Dillion McGraw, Ryan McGraw, Stewart Pyatt, Sean McGraw, Daniel Morrison, and Greg Morrison. Memorials may be given to the American Lung Association, American Heart Association, or to the Elmwood Church of Louisiana in care of the funeral home. On-line condolences may be sent at www.collierfuneral.com.

The family of Carolyn Geery created this Life Tributes page to make it easy to share your memories.

Send flowers to the Geery family.