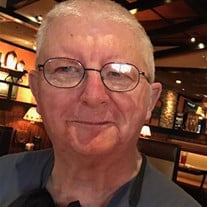 MSgt (Ret) Carl Newton Gilmore, of Louisiana, passed away on June 28,2019. A memorial service will be held at 11:00 A.M. on Saturday, July 6, 2019 at the Collier Funeral Home in Louisiana, MO. Visitation will be from 10:00 A.M. until time of service Saturday at the funeral home. Born March 21, 1939 to Warren Jasper and Martha Elizabeth Gilmore, (Higman) in Indianapolis Indiana. He was married to Barbara Ann (Hightower) Gilmore on June 30, 1961 in The Church of Jesus Christ of Latter-Day Saints, of which he was a member. He is survived by three children, Carla Jean Findlay, (Gilmore) (Mike)of Columbia MO, Carl Gilmore Jr of Fairbanks AK Freda Ann Smith, (Gilmore) (Tracy) of Council Bluffs Iowa. One brother Richard Gilmore of Buckhorn, NM. One sister Joanna Etheridge of Mechanicsville VA. Nine grandchildren Peter Burdych II of Corrine UT, Carl Gilmore lll of Fairbanks AK, Savanna Smith Armour of North Pole AK, Gregory Smith of Omaha NE, John Findlay of Snohomish, WA Ryan Findlay of Columbia, MO Mat Findlay of Hannibal, MO, Melanie Cejka of Kansas City, MO, MJ Findlay of Knoxville. TN. Most of the grandkids remember him for his ice cream, Pepsi. Fourteen great grandchildren and another due this fall. He had many nieces and nephews he knew them all and was a great part of their lives. Carl served in the US Air Force 1960-1982. He was a Vietnam Vet, was a member of the American Legion, Air Force Sergeants Association. MSgt (Ret) Gilmore graduated from Morton Memorial High School in Knightstown IN. He received Associates degree from McIntosh College Dover NH and a Bachelors’ Science from Franklin Pierce in New Hampshire. He loved to work and master the computer as a programmer, it brought him to a job in Louisiana Missouri. He was stationed in Rantoul Illinois when he met Barbara. They have traveled the world with the Air Force in those years. Virginia, Florida, Thailand, Japan, Kansas, Nevada, W. Germany and New Hampshire. He retired from the USAF in Jan 82. He stayed in New Hampshire until 1990, when he and Barbara moved to Louisiana MO. Everyone loved his funny ways and sense of humor. He was preceded in death by his parents, grandparents, his sisters Beverly Raickle, Nancy Brent Due to his exposure to Agent Orange in Vietnam he developed multiple medical problem. The Truman VA was a great place for his treatments, he never got mad to have to wait if they were running behind. I would like to thank all his doctors and specialty clinic who have taken care of him.

The family of Carl N. Gilmore created this Life Tributes page to make it easy to share your memories.

MSgt (Ret) Carl Newton Gilmore, of Louisiana, passed away on...

Send flowers to the Gilmore family.