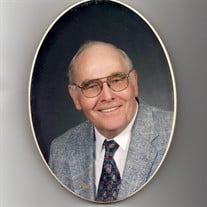 Bruce Ayers Rodhouse, 81, of Clarksville passed away Sunday Nov 11, 2018 at Hannibal Regional Hospital. Funeral service will be held at 10:00 A.M. Thursday Nov. 15, 2018 at the Collier Funeral Home in Louisiana, MO. Burial follows in Wells Cemetery near Pleasant Hill, IL. Visitation is Wednesday evening from 4:00 P.M. until 7:00 P.M. at the funeral home. Bruce was born on the family farm near Pleasant Hill, IL to Louis and Beatrice Ayers Rodhouse on Feb 5, 1937. He was united in marriage to Alice Roberts of Clarksville, MO on July 25, 1957. Their marriage was graced with three children. Bruce was a lifelong Methodist and willingly served his church in many capacities. He was a member of Centenary United Methodist Church, Louisiana, MO. When his children were young, he was a cub scout leader, 4-H leader and an active FFA parent. He had been a Calumet United Fund board member, an officer of the Calumet Rural Fire Department and a board member of Clarksville Special Road District #2. He also served on the county FHA committee. Farming was his passion, and he often said he wanted to leave the land in better condition than he found it. He is survived by his wife of 61 years, his children, David Wayne (Ingrid) of Clarksville, MO, Steven Louis (Debbie) of Parkville, MO, and Lisa (David Stein) of Defiance, MO and four grandchildren Grace (Charles Jr.) Criteser of Lincoln, NE, John Rodhouse of Rolla, MO, Kathryn Rodhouse of Albuquerque, NM and Lindsey Rodhouse of Fayetteville, AR. Also surviving are two brothers Fred and Jerry of Pleasant Hill, IL and many nieces and nephews. He was preceded in death by his parents, a sister Bonnie Sitton, a brother Donald (Joe) and two brothers-in-law Jerry and Jack Roberts. Memorials are suggested to Centenary United Methodist Church or the Arthritis Foundation c/o Collier Funeral Home.

The family of Bruce Ayers Rodhouse created this Life Tributes page to make it easy to share your memories.

Send flowers to the Rodhouse family.