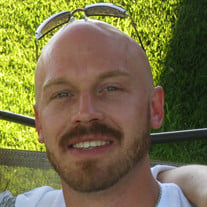 Brian Joseph Perkins, 37, of Louisiana, MO passed away Saturday, May 2, 2015. Visitation will be held on Tuesday, May 5, from 4-8 pm and funeral services Wednesday, May 6 at 10 am at Collier Funeral Home in Louisiana. The Rev. Ben Teague will officiate. Burial to follow at Fairview Cemetery. He was born January 3, 1978 in Hannibal, MO to Bill Perkins and Hazel Branstetter Perkins. Survivors include his parents Bill Perkins (Jill) and Hazel Perkins (Art), two children: Madison Jo Perkins and Tyler Joseph Perkins of Louisiana, four siblings: Cindy Perkins of O’Fallon, Brad Perkins of Louisiana, Jackson Jones (Becky) of Louisiana, and Kerri Perkins of Springfield; three nephews: Nathan Perkins, Alex Jones, and Evan Jones of Louisiana. He was preceded in death by his paternal and maternal grandparents; three uncles: Eddie Perkins, Chick Branstetter, and Gary R. Ray; one aunt: Margaret Ann Ray. Brian was a 1997 graduate of Louisiana High School. After graduation, he worked several jobs including working with his father as a contractor. He was currently working for Iron Horse as a Construction Foreman. He enjoyed spending time with his children, family, and good friends. Brian was a fun loving, kind hearted, and caring person who would do anything for anyone. He accepted Christ as his Savior as a young boy. Brian was always a “happy go lucky” child who always had a smile on his face. He adored his children Madison and Tyler and was so proud of them. Pallbearers will be co-workers: John “Bear” Lucas and Bob Cassidy, long-time friends: Jeremy Slater, Raymond Elliott, Joey Penrod, Ben DeVerger, Brad Singleton, Brian Crowder, Scott Gschwender, and Brad Schnitzer. In lieu of flowers, the family requests that memorial contributions may be made to Mercantile Bank of Louisiana for the benefit of his children, Madison and Tyler Perkins.

Brian Joseph Perkins, 37, of Louisiana, MO passed away Saturday, May 2, 2015. Visitation will be held on Tuesday, May 5, from 4-8 pm and funeral services Wednesday, May 6 at 10 am at Collier Funeral Home in Louisiana. The Rev. Ben Teague... View Obituary & Service Information

The family of Brian Joseph Perkins created this Life Tributes page to make it easy to share your memories.

Send flowers to the Perkins family.