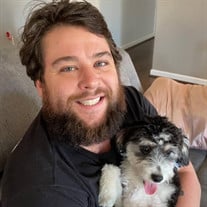 Brett James Smith, 29, passed away unexpectedly September 3rd, 2021 at his home in Moscow Mills, MO. He was born March 26th 1992 to Eric J. Smith and Christy K. Glasgow Smith at Pike County Memorial Hospital. He was preceded in death by his parents, a paternal Grandfather Lael Swope and maternal Grandfather Jim “Moon” Goodin, and other loved grandparents, aunts, uncles, and cousins. He is survived by Paternal Grandmother, Nancy J. Swope, Maternal Grandmother, Debbie Goodin, Step-Mother Michelle Garrison and Grandparents Mike and Bette Garrison, and very special friend, Braxton Wallace. Surviving are also many Aunts, Uncles, and cousins. Brett graduated from Louisiana High School in 2010. He then graduated in 2015 Missouri Western State University with a BS in Economics. He was also a member of the Phi Sigma Kappa Fraternity. He had been employed at Bullhorn, Inc., a leader in the software industry, for the last several years. Brett tried to enjoy life to the fullest. He always made sure the people he loved were having the best time as to leave us with the most amazing memories of him. He lived hard, loved hard, and fought hard in his short life. He was a very humble man with the most beautiful and gentle soul. He valued the people in his life more than anything in the world and was so very thankful for his support system. He loved traveling, experiencing new things, and seeing different things. He had planned on doing so much more traveling. He loved his St. Louis Cardinals too! He not only leaves behind family, but an eclectic group of many, many friends. He was the pride of joy of his grandparents Nancy, her only grandson, and Debbie, her first born grandson. There will be no immediate services, but a Celebration of Life is pending to be announced at a later date. Collier Funeral Home in Louisiana, MO is in charge of arrangements. Honorary Pallbearers are Nick Goodin, Alex Goodin, Tyess Chatman, Colby Garrison, Jacob Stoops, Ethan Crowder, Dylan Crowder, Eli Feldmann, Justin Walker, Chase Cagle, Ronald Ivey, and Michael Ivey. Please withhold donations until his Celebration of Life or make donations to donor’s choice.

Brett James Smith, 29, passed away unexpectedly September 3rd, 2021 at his home in Moscow Mills, MO. He was born March 26th 1992 to Eric J. Smith and Christy K. Glasgow Smith at Pike County Memorial Hospital. He was preceded in death by his... View Obituary & Service Information

The family of Brett James Smith created this Life Tributes page to make it easy to share your memories.

Send flowers to the Smith family.