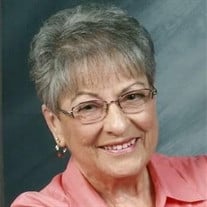 Mrs. Bonnie Sue Penrod, 75, of Louisiana, Missouri passed away Wednesday, April 20, 2016 at the University of Missouri Medical Center in Columbia, Missouri. Funeral services will be held at 1:00 p.m. Saturday, April 23, 2016 at the Collier Funeral Home in Louisiana. The Rev. Randall Cone will officiate. Visitation will be held from 11:00 a.m. until time of services at 1:00 p.m. Saturday, April 23rd at the funeral home. Burial will be in the Greenlawn Cemetery in Bowling Green, Missouri. She was born October 6, 1940 in Marling, Missouri to Lonnie and Violet Nutter Shepard. She married Clark Pointer March 27, 1959 and to this union was born three daughters; Kimberly Page (Dan) of Frankford, Missouri, Cynthia Adkison of Bowling Green, Missouri and Theresa Hook (Sam) of Troy, Missouri. She married John “Butch” Cafer April 6, 1974 and he preceded her in death in August of 1995. She married Bobby Jay Penrod November 30, 1996 and he survived. She is also survived by three step-daughters; Robin Martin, Shannon Willis (Rodney) and Kathy Walker (Roger) all of Louisiana, Missouri, 17 grandchildren and numerous great grandchildren. She was preceded in death by her parents, Lonnie and Violet Nutter Shepard, two sisters, Shirley Eoff and Patsy Elder and one step-son, James Thomas Cafer. She graduated from the Bowling Green High School in 1958. She was a member of the Grassy Creek Baptist Church near Louisiana and a member of the American Legion Post 370 Ladies Auxiliary in Louisiana. Pallbearers are; Dan Page, David Adkison, Sam Hook, Shaun Hook, Austin Hook and Daniel Adams. Memorials may be given to the Pike County Hospital Dialysis Unit in care of Collier Funeral Homes, Inc., 117 Barnard Drive, Louisiana,Missouri 63353

The family of Bonnie Sue Penrod created this Life Tributes page to make it easy to share your memories.

Send flowers to the Penrod family.