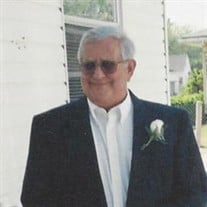 William (Billy Guy) Edwards, 82, of Louisiana, Missouri passed away Friday, December 12, 2014 at the Pike County Memorial Hospital in Louisiana following a lengthy illness. Mr. Edwards fell in 2008 and had been bedfast most of the time since. He was born August 28, 1932 in Louisiana, Missouri the son of Guy and Sarah Meyers Edwards. He married Willene Winner June 5, 1959 at the Grassy Creek Baptist Church near Louisiana. He is survived by his wife of 55 years Willene Winner Edwards of the home, one daughter, Tari Edwards Lawson, 4 granddaughters; Ashley Lawson, Michelle Lawson, Allison Lawson and Drea Griffith all of Louisiana, Missouri. Two brothers; Richard Brown of Louisiana, Missouri and Michael Edwards of Pittsfield, Illinois. He was preceded in death by his father, Guy Edwards, mother, Sarah Brown , step-father, Earl Brown, one sister, Donna Elliott and a nephew, Raymond Elliott. He had been employed as a Warehouse Supervisor for Louisiana Plastics for 32 years retiring in 1994. He attended the Louisiana Schools and was a Baptist by faith, but had attended the Salt River Christian Church in New London for several years prior to his fall. In his spare time he enjoyed working in his yard and had landscaped it with thousands of geodes. He was very proud that he had the honor of receiving “Yard of the Month” twice. Billy Guy had never met a stranger. He loved his family and was especially proud of his four granddaughters. Funeral services will be held at 1:00 p.m. Wednesday, December 17, 2014 at the Collier Funeral Home in Louisiana. The Rev. Richard Epperson will officiate. Visitation will be held from 11:00 a. m. until time of services at 1:00 p. m. Wednesday, December 17th at the funeral home. Burial will be in the Fairview Cemetery near Louisiana, Missouri. Honorary pallbearers are; John Pitzer, Joe Pursifull, Johnny Bryant, Lawrence Poyser, Anthony Stark and Jim Renner. Active pallbearers are; Bobby Reed, Jerry Reed, Chris Stark, Charles Norris, Jerry Crane and Danny Lee. Memorials may be given to the family in care of Collier Funeral Homes, Inc., 117 Barnard Drive, Louisiana, M0 63353.

William (Billy Guy) Edwards, 82, of Louisiana, Missouri passed away Friday, December 12, 2014 at the Pike County Memorial Hospital in Louisiana following a lengthy illness. Mr. Edwards fell in 2008 and had been bedfast most of the time since. He... View Obituary & Service Information

The family of Billy Guy Edwards created this Life Tributes page to make it easy to share your memories.

Send flowers to the Edwards family.