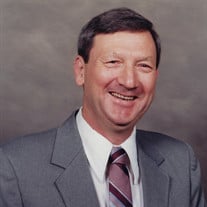 Mr. Anthony “Tony” Stark, 88, of Louisiana, MO, passed away on Friday, September 18, 2020 at the Maple Grove Lodge Nursing Home in Louisiana, MO. Memorial services will be held at 12:00 P.M. on Friday, September 25, 2020 at the Collier Funeral Home in Louisiana, MO. Mr. Mark Dobelmann will officiate. Burial of his ashes will follow at the St. Joseph Cemetery in Louisiana, MO. Visitation will be from 10:00 A.M. until time of service Friday at the funeral home. He was born on November 10, 1931 in St. Clement, MO to Herman A. Stark and Teresa Tepen Stark. He was married to Emma Jean Capps on January 26, 1952 at the rectory of St. Joseph Catholic Church in Louisiana, MO and she preceded him in death on October 16, 2018. He is survived by sons, Tony Stark (Jane Ellen) of Valley Park, Bradley Stark (Terry) of Louisiana, and Christopher Stark of Louisiana; daughter, Terri Clark (John) of Moscow Mills; grandchildren, David Stark, Jonathon Stark (Jami), Sadie Redman (Jason), Patrick Koons, Brenton Stark (Jesse), Kara Headrick (Eric), Erin Gough (Dane), Alissa Moore (Donald), Alexa Stark, Collin Stark (Lauren), and Caden Stark; 10 great grandchildren; and nieces and nephews. He was preceded in death by his parents and wife, 2 sisters, Ermadell Smith and Martha Grote, and a brother, Kenneth Stark. Tony was a graduate of the Louisiana High School. He had co-owned and operated the Tri-Shell Service Station in Louisiana, MO, had worked for Hercules, Inc. for a while, and then MO Edison, which later became Union Electric until his retirement in 1992. He was a member of the St. Joseph Catholic Church in Louisiana, MO staying active in many church activities and fish fry’s, and a member of the Knights of Columbus achieving 4th Degree Knight of St. Isidore General Assembly. He enjoyed Cardinal baseball, watching and reading westerns, playing cards, going to the Trimble House, but mostly spending time with his grandchildren. Memorials may be made to the St. Joseph Cemetery or St. Joseph Masses in care of the funeral home.

The family of Anthony "Tony" Stark created this Life Tributes page to make it easy to share your memories.

Send flowers to the Stark family.