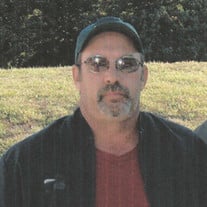 Mr. Anthony “Tony” Coy, 60, of Clarksville, MO, passed away on Thursday, January 9, 2020 in Louisiana, MO. A Celebration of Life service will be held from 2:00 P.M. to 5:00 P.M. on Thursday, January 16th at the Edgewood Baptist Church in Edgewood, MO. Cremation rites are provided by Collier Funeral Home in Louisiana, MO. Tony was born on December 5, 1959 in St. Louis, MO to Anthony Coy Sr. and Ruby White Coy. His mother Ruby preceded him in death and Anthony Sr. later married Lena Sue Sparks when Tony was 18 months old. He was raised by Anthony Sr. and Lena Sue and grew up in Louisiana, MO. He was a graduate of Louisiana High School with the Class of 1978. He entered the US Air Force right after High School and got married and had 3 children, Jody, Stephanie, and Erica. He also had one son, Robert from his second marriage. He later married Karen Gilmore and they were currently married at the time of his death. He was preceded in death by his maternal and paternal grandparents, his dad and mom, and a step-son. He is survived by his wife, Karen Coy of the home; son, Jody Coy and wife Sandy, and their children, Tristan, Gavin, and Abbie; daughter, Stephanie Patrick and husband Jim, and their children, Deamona and Max; daughter, Erica Quinlin and fiancé Jamie Main, and children Ronnie, Lynn, Sue, Caydence, Laudon, Nathan, Killian, and Xavier; son, Robert Coy; step-children, Mel Gilmore, Lyndon Gilmore, Michelle Hightower, and Danielle Howell; and many other grandchildren, nieces and nephews, great grandchildren, great nieces and nephews, a great great nephew, numerous cousins, and a maternal aunt. Tony was a truck driver by trade and was loved for his hard-working ethics, having a big heart, and his love of family and fun. His favorite pastime was being with family, especially his grandchildren. He will be sorely missed. On-line condolences may be sent at www.collierfuneral.com.

The family of Anthony "Tony" Coy created this Life Tributes page to make it easy to share your memories.

Send flowers to the Coy family.