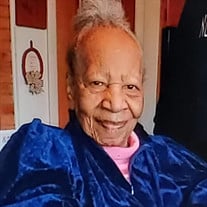 The Lord called Mrs. Anna Rudd’s name on Monday, March 21, 2022 and she answered the call. She had just celebrated her 109th birthday in February. Services will be held Saturday, April 2, 2022, at the Collier Funeral Home at 117 Barnard Drive in Louisiana, MO. Pastor Rodrick Burton from New Northside Missionary Baptist Church in St. Louis, MO will be officiating. Visitation is from 11:00 a.m. to 1:00 p.m. Services start at 1:00 p.m. Burial will be in the Mt. Ayre Baptist Church Cemetery in Edgewood, Missouri. Anna Norton Thomas was born in Prairieville, MO, February 12, 1913, to Frederick Wilson Thomas and Lula Belle Simon Thomas. She married Charles William Rudd, Sr., on February 7, 1937. They were married for 49 years until he passed in 1986. To this union 10 children were born. She is survived by her children; Annette Tucker (Henry) of Centralia, MO; Charles W. Rudd, Jr., of Spanish Lake, MO; Rosemary Nailon (Robert) of Altadena, CA; Kathleen Alexander of Jennings, MO; Susie Smith of Kansas City, MO; and Loretta Dedmon of Bedford, TX. There are ten grandchildren; Charles Bryant Jr. of Moscow Mills, MO; Mary Bryant Griffith of Louisiana, MO; Bryan Tucker of Centralia, MO; Scarlett Rademaker of Pekin, IL; Tonya Williams of San Antonio, TX; Rachelle Nailon of Atlanta, GA; Robert Nailon of Altadena, CA; Renay Nailon of Atlanta, GA; Joyce Fort of Phoenix, AZ; William Smith of Atlanta GA; two nieces, 15 great grandchildren, 11 great great grandchildren, and a host of cousins, friends, a special neighbor, Mrs. Maxine, and special friends Earnestine, Vatisha, and Kisha. Preceding her in death were her husband, Charles William Rudd, Sr., James, a son who died, loving parents, two sisters, Mabel Thomas and Rosie Williams; two brothers Gilmore Thomas and Fred Thomas; three children, Marjorie Rudd Bryant, Frederick G. Rudd, Joyce L. Rudd, and one grandson, Michael Q. Alexander. She was an amazing woman. After she accepted the Lord at an early age, she became active in serving the Lord. Originally a member of the Eolia Baptist Church, her final membership was at the Mt. Ayre Baptist Church in Edgewood, MO, where she served as the church secretary, treasurer of the Mission Circle, and as pianist. She furthered her education beyond high school by attending Lincoln University in Jefferson City, Missouri where she received her teaching certificate. She taught for several years at a one room school located in the Old Knob area near Edgewood, MO. Throughout the years, many of her students returned to acknowledge her influence on their lives. She was fortunate enough to receive piano lessons when young and used that talent to play not only for her own church, but for many of the neighboring churches until her 90th birthday. Reading, crocheting, sewing, quilting, singing, listening to the radio, and reminiscing were some of her favorite things to do. Her sharp sense of humor and laugh was delightful. She will be sorely missed. The family is requesting attendees to wear masks for the visitation and the service. Memorials may be given to the donor’s choice in care of the funeral home.

The Lord called Mrs. Anna Rudd&#8217;s name on Monday, March 21, 2022 and she answered the call. She had just celebrated her 109th birthday in February. Services will be held Saturday, April 2, 2022, at the Collier Funeral Home at 117 Barnard... View Obituary & Service Information

The family of Anna Rudd created this Life Tributes page to make it easy to share your memories.

Send flowers to the Rudd family.