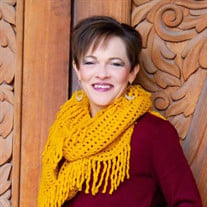 Angela Winkelmeier, 48, of Wentzville, Missouri went to be with her Savior on Wednesday, February 16, 2022 at St. John’s Mercy Hospital in St. Louis. Celebration of Life services will be held at noon on Monday, February 21 at the First Baptist Church, 608 S. Carolina, in Louisiana. Reverend Jay Scribner of Branson will officiate. Visitation will precede the services at the church from 10 a.m. until service. Angela was born in Ft. Worth, Texas on October 25, 1973. She was the daughter of Dr. William A. Maupin and Brenda Rae (Naysmith) Maupin. She graduated from Dayton Christian High School, Dayton, Ohio, in 1992 and received her B.A. degree from Hannibal LaGrange University with a major in music education in 1996. For nine years, she taught vocal music at all levels in St. Elizabeth, New Haven and Winfield, Missouri schools. In 1998, she married the love of her life, David Winkelmeier. They were married for 22 years until his death in 2020. Angela and David invested their lives in others. They fostered at least nine children and adopted four children. Not only did they serve children, but they also served their Lord and Savior through various churches in the Wentzville and O’Fallon, Missouri area. Angela was a member of Faith Chapel in O’Fallon. Just before the death of her beloved husband, Angela began a 2 ½ year battle with stage four cancer. Her great faith and perseverance sustained her and has influenced and inspired countless people. Her last text to her friends and family just before she died was, “Do not fear; only believe!” Her life was her Lord, her children and her music. She was a loving mother, gifted vocalist and talented teacher. She is survived by her parents, Dr. and Mrs. William Maupin of Louisiana, Missouri. Her children, Megan Winkelmeier, residing in Illinois and her three sons: Eden, Jax and Jude of Perry, Missouri. Her sister, Amanda Norton and husband, Craig of Perry and her brother, Micah Maupin and his wife Heather of Webster Groves, Missouri. She is also survived by her grandmother, Janice Naysmith of Laddonia, Missouri, along with aunts, uncles, cousins, nieces and nephews in Missouri, Oklahoma, Nebraska and Arkansas. Memorial gifts can be made to the Collier Funeral Home, 117 Barnard Drive, Louisiana, MO 63353 designated for the “Winkelmeier Trust Fund”, to assist in caring for Angela’s three children. A second Celebration of Life service will be conducted at Faith Chapel, 2327 Technology Dr., O’Fallon, Missouri, on Saturday, February 26 at noon, with visitation from 11 a.m. until service.

Angela Winkelmeier, 48, of Wentzville, Missouri went to be with her Savior on Wednesday, February 16, 2022 at St. John&#8217;s Mercy Hospital in St. Louis. Celebration of Life services will be held at noon on Monday, February 21 at the First... View Obituary & Service Information

The family of Angela Rene Winkelmeier created this Life Tributes page to make it easy to share your memories.

Angela Winkelmeier, 48, of Wentzville, Missouri went to be with...

Send flowers to the Winkelmeier family.