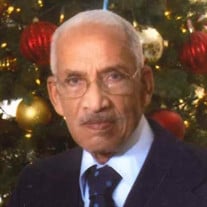 Mr. Alphonso Webb, 93. Of Paynesville, MO, passed away on Sunday, April 3, 2022 at the St. Lukes Hospital in Chesterfield, MO. Funeral services will be held at 12:00 P.M. on Monday, April 11, 2022 at the Collier Funeral Home in Louisiana, MO. The Rev. C. Jessel Strong officiating. Burial will be at the Greenwood Cemetery in Clarksville, MO. Visitation will be held from 10:00 A.M. until time of service Monday at the funeral home. Alphonso was born on December 27, 1928 in Pike County, MO to Evelent Webb and Lula Belle Houston Webb. He was married to Gloria Kathryn Sanders in May of 1951 in Clarksville, MO and she preceded him in death on July 2, 2014. He is survived by his daughter, Kathy Webb-Love of St. Louis, MO, a granddaughter, Kristina Laney of St. Louis, MO, a sister, Joyce Chambers of Denver, CO, and a host of nieces, nephews, cousins, and friends. He was preceded in death by his parents, Evelent and Lula Belle, his wife, Gloria, and a brother, Lawrence Webb. Alphonso was born and raised in Pike County, he was a graduate of Lincoln High School in Louisiana, MO with the Class of 1947. It was at Lincoln High that he had met his wife Gloria and they were married 63 years together when she passed away. He was a member of the Bethel AME Church in Paynesville, MO. Alphonso was a veteran serving in the US Army and was a member of the VFW Post 4610 in Clarksville, MO. He had farmed in the Clarksville area for a number of years raising livestock and was also employed at Dundee Cement Co., later named Holcim, until his retirement in 1994. Memorials may be made to the Bethel AME Church in Paynesville, MO or the VFW Post 4610 in Clarksville, MO.

The family of Alphonso E. Webb created this Life Tributes page to make it easy to share your memories.

Send flowers to the Webb family.