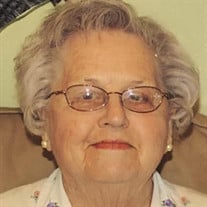 Alice Louise Mackey Jenkins, 87 years old of Louisiana MO, passed at her home on Friday, February 5, 2021 surrounded by her family after an extended illness. Visitation will be held from 11:00am-1:00pm on February 9, 2021 at Collier Funeral... View Obituary & Service Information

The family of Alice Louise Jenkins created this Life Tributes page to make it easy to share your memories.

Send flowers to the Jenkins family.